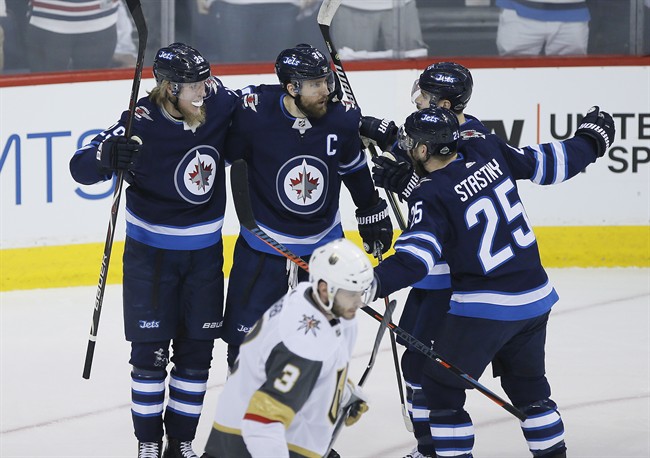 WINNIPEG – Having knocked off the Presidents’ Trophy winners in Game 7 of a gruelling slugfest less than 48 hours earlier, the Winnipeg Jets had an excuse if their legs were tired on Saturday night.

Instead, they came out flying and never looked back to land the opening blow of the Western Conference final.

Dustin Byfuglien scored on a booming slapshot 65 seconds into the first period to unleash a three-goal outburst inside eight minutes as the Jets defeated the Vegas Golden Knights 4-2 to grab a 1-0 edge in the series.

The six-foot-five, 260-pound defenceman leaned into a drop pass from Mark Scheifele off the rush after Blake Wheeler made a good defensive play for his fifth of the playoffs to send the deafening crowd at Bell MTS Place into a further frenzy.

“Overall it was just doing the right things,” said Byfuglien, as usual downplaying his performance. “Starting the game as a team, moving our feet, just keeping it simple.

“Just got it across the (blue line) … getting shots to the net early and one happened to go in.”

His head coach put things a little more into focus.

“You saw the Dustin Byfuglien spectrum,” Winnipeg’s Paul Maurice said. “He can shoot the puck a ton, he can make soft-hand plays, and he can be as big and strong as you want out there.”

“He’s awesome and he’s been awesome for us all playoffs,” added Scheifele, who like Byfuglien finished with a goal and an assist. “He does it all.”

Patrik Laine and Joel Armia also scored for the Jets, who eliminated the 117-point Nashville Predators in their second-round matchup with Thursday’s dominant 5-1 road victory.

Wheeler chipped in with three assists to give him a playoff-best 15, while Connor Hellebuyck had to make just 19 saves as Winnipeg blocked 22 shots.

Brayden McNabb and William Karlsson replied for the expansion Knights, who got 22 stops from Marc-Andre Fleury.

Game 2 goes Monday in the Manitoba capital before the series shifts to Sin City for Games 3 and 4.

Jonathan Marchessault recorded two assists for Vegas, which had five days off after beating the San Jose Sharks in six games in the second round, and now trails a series for the first time after also sweeping the Los Angles Kings.

“Not the start we wanted,” Marchessault said. “They just played two days ago, but they were game-ready and we weren’t.

“We’re going to see what kind of team we are. (Monday) is definitely a must-win.”

After the Jets went ahead on Byfuglien’s blast, Winnipeg made it 2-0 on the power play at 6:49 when 33-year-old blue liner made a great play to keep the puck in offensive zone.

Wheeler eventually fed a cross-ice pass to Laine, who one-timed his fourth, but just his second since Games 1 and 2 of the first-round victory over the Minnesota Wild, as the Jets scored on two of their first six shots.

Fleury, who came in with four shutouts and a .951 save percentage in the playoffs, made a great stop to deny Bryan Little on a 3-on-1, but could do nothing when Ben Chiarot’s shot went in off Armia’s skate for his second as he cruised through the crease at 7:35.

The goal was initially waved off, but it was determined following a Winnipeg challenge there was no kicking motion or contact with Fleury until the puck crossed the line.

Vegas got one back just 35 seconds later when McNabb scored his second to make it 3-1 just 8:10 into the game.

Wheeler was then sent flying into the Vegas bench by Knights tough guy Ryan Reaves on a clean hit that saw the Winnipeg captain’s skates flailing in the air as he struggled to get back into the action.

“They came out hard like we expected,” Fleury said. “We made our way back throughout the game. I thought we stuck with it, though, nobody panicked, and played great second and third.”

Vegas pushed a bit to open that second, but Scheifele stretched his lead atop the playoff goal race to 12 when he tipped Byfuglien’s point shot on a power play at 9:54.

Jets fans responded to that goal by relentlessly heckling Fleury during the ensuing TV timeout.

The Knights, who finished their stunning regular season with 109 points compared the second-place Jets’ 114, got back to within two at 4-2 on a man advantage of their own with 4:05 left in the period when Marchessault whipped a pass in front to Karlsson for his fifth

But that’s as close as the visitors would get as Winnipeg — a league-best 42-1-1 when ahead after two periods in the regular season — closed things down in the third to improve to a perfect 9-0 when up through 40 minutes in the playoffs.

“You’ve got to be dedicated to those little things,” said Wheeler, whose team is in a conference final for the first time in the city’s history. “They add up at the end of the day.”

And on this night, they amounted up to Jets’ victory that has them just three wins from the Stanley Cup final.