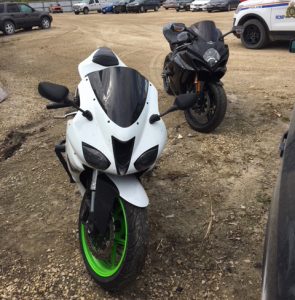 Two motorcycles were seized in the Steinbach area on May 11, 2018. (RCMP HANDOUT)

Two motorcycles were seized last weekend after Steinbach RCMP clocked both of them excessively speeding.

Police were on patrol May 11 when they caught a motorcyclist travelling 202 km/h in a 100 km/h on Highway 52 between La Broquerie and Steinbach.

The 21-year-old Steinbach man was fined $1,385, issued a serious offence notice and had his driver’s licence and his motorcycle seized.

Later that night, RCMP say a 20-year-old Steinbach man drove his motorcycle through several stop signs in Steinbach, weaving in and out of traffic at a high rate of speed. He zoomed through a red light at Highway 12 and Loewen Boulevard, then blew another stop sign on Giesbrecht Street. He eventually stopped at Ellice Avenue and Giesbrecht Street, where officers were waiting to greet him.

He faces several charges under the Highway Traffic Act, as well as driving with an invalid licence. His motorcycle was also seized.