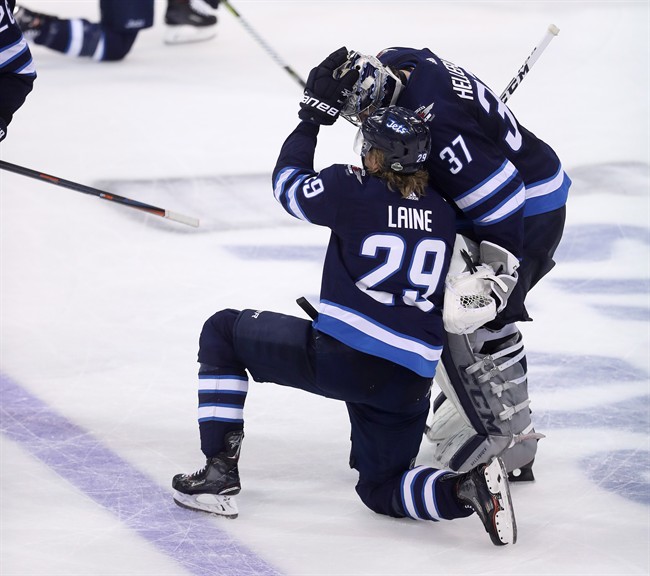 WINNIPEG – When the buzzer sounded to end the game and the season for the Winnipeg Jets on Sunday, goalie Connor Hellebuyck left the bench and went back on to the ice.

The netminder had been off for an extra attacker, but six skaters couldn’t tie up the game and Jets were eliminated from the playoffs as the expansion Vegas Golden Knights won the Western Conference final series in Game 5 with a 2-1 victory.

Hellebuyck went up to his teammates still on the ice, many bent over their sticks their heads hanging dejectedly, and gave them a pat and said a few words in what he agreed was an emotional moment.

“These guys left their heart out there,” Hellebuyck said. “You could tell how hard they worked. Not only tonight, but all season long. I’m proud of the way these guys played in front of me.”

Hellebuyck turned aside 30 saves in his final outing of a season in which he’s a finalist for the Vezina Trophy along with Tampa Bay’s Andrei Vasilevskiy and Pekka Rinne of Nashville. But his strong performance was overshadowed by the play of Vegas’ veteran goaltender Marc-Andre Fleury, who stopped 31 shots and continued being the brightest star on a team of castoffs from other clubs.

“I thought this was our year,” Hellebuyck said. “You could see how hard everyone was working. How much everyone wanted it. That’s why this one’s tough.”

Vegas winger Alex Tuch scored 5:11 into the first period after Jets defenceman Josh Morrissey turned over the puck on a pass attempt in front of the net. But Morrissey bounced back when his one-timer beat Fleury for his first career playoff goal with 2:46 left in the opening period.

Winnipeg native Ryan Reaves scored the go-ahead goal with a high deflection of defenceman Luca Sbisa’s point shot that hit the crossbar and then went in at 13:21 of the second period.

“I didn’t see much,” Hellebuyck said of the game-winning shot. “But any time a guy tips it and it goes bar south, you know something’s going right for them. That was tough to swallow, but I guess that’s the game.”

Jets captain Blake Wheeler said he thought the Jets had been the better team going into the series, but Fleury was the difference-maker.

“Their goaltender was extraordinary,” Wheeler said. “There were numerous times the puck was in spots where it looked like it was in the net or going in the net. And he’s playing lights out right now.”

But he also credited Hellebuyck for his performance.

“He played awesome,” Wheeler said. “This isn’t on him. He made some terrific saves to give us a chance.”

Centre Mark Scheifele, who scored 14 goals and had 20 points in the playoffs, also pointed to Fleury as the wall they couldn’t break down.

“They had the best goalie in the league right now. He stood on his head. He made a lot of big saves,” Scheifele said. “Their (defence) played solid, played solid in their D zone.”

Forward Paul Stastny, acquired by Winnipeg before the trade deadline from St. Louis, was asked why the Jets had a tough time generating offence.

“Fleury played well,” Stastny said, following the theme. “I think once they got the lead, they did a good job of kind of almost playing a traffic game and trying to force us to do too much ourselves. Sometimes we got into trouble, one guy trying to go through five guys and then that never works.

“It happened in the past series, we learned from it. Later in the game, everyone tries to do a little extra, you’re trying so hard for each other and sometimes that’s the worst thing you can do.”

“I don’t think we ran out of gas at all,” Jets head coach Paul Maurice said. “We lost some sharpness. When you look at the second half of our last two games, especially, we were driving as hard as we could. So there was fuel in the tank. There was a hard and heavy push and it was right.”

Winnipeg finished second overall in the NHL behind Nashville and the franchise went deeper into the playoffs that the former Atlanta Thrashers club or the original Jets.