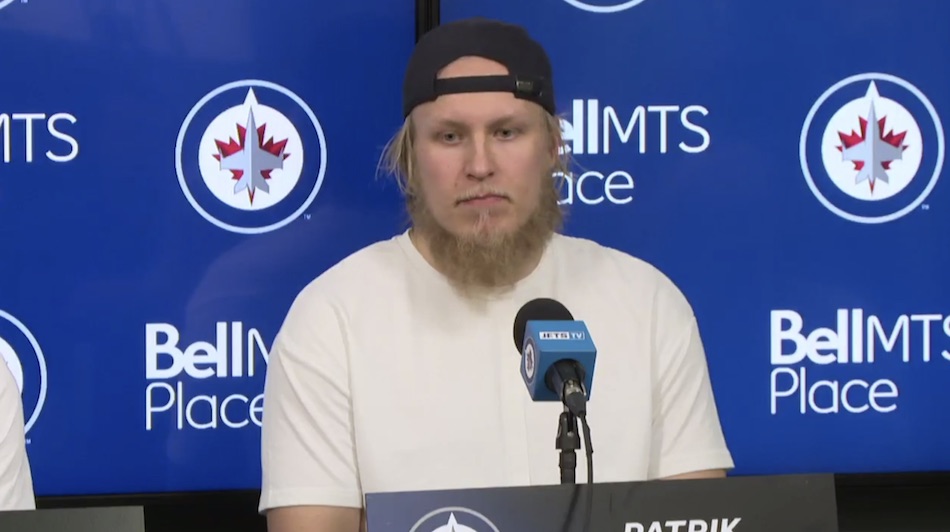 Winnipeg Jets forward Patrik Laine speaks with the media at a year-end news conference on Tuesday, May 22, 2018. (JETS TV)

WINNIPEG – Patrik Laine will look like a new man by the weekend.

The Winnipeg Jets top goal-scorer has an appointment booked with his hairdresser in Finland to cut his long locks and shave off his scruffy beard, ridding himself of a look that drew teasing from his teammates and jokes from fans.

“The woman who cuts my hair, she’s going to cut my beard, too, on Friday at two (in the afternoon) back home. So, a couple more days,” Laine said Tuesday as players had their last media availability after being eliminated by Vegas last Sunday in the NHL Western Conference final series.

“Yay. Finally, finally,” his linemate Nikolaj Ehlers said with a smile as the pair sat at a table together to answer questions.

Laine began the season with short, sandy-coloured whiskers and said he had a friendly bet with his cousin to see how long they could grow beards.

As his facial hair grew, so did the jabs on social media and in the locker room.

“It’s got uglier and uglier,” teammate Bryan Little had said with a smile in March. “When he finally shaves it he’s going to look like a new man.”

Fans even referred to Laine looking like a member of the Amish community, whose married men traditionally grow bushy beards.

Laine was on a goal-scoring tear in March and was asked if perhaps the beard would become a superstitious habit.

“Who knows?” he replied a laugh. “Let’s see where we’re at in a month or a couple more months. It might be a good thing, but we’ll see.”

The sophomore sniper finished the regular season with 44 goals and 70 points in 82 games, five goals fewer than NHL leader Alex Ovechkin of the Washington Capitals. But 20 of Laine’s goals were scored on power play to top the league, three more than his childhood idol.

During the playoffs, the 20-year-old winger notched five goals and seven assists in 17 games, with three goals on the power play. Mark Scheifele led the Jets with 14 goals.

“You can always watch the playoffs on TV and it all looks cool and it’s intense, but it’s just something different,” Laine said. “Like the whole atmosphere is just like another level, especially here with the whiteout and with all the street parties, so it’s pretty unique.

“I think this is the reason why we play hockey so we can still be playing playoff hockey in May. It was just probably a year that I will always remember, especially the playoffs. But there’s a lot of things that we can learn from these playoffs for going into next year and the future, too.”

It's coming off: Patrik Laine has set a beard-cutting day back home in Finland. pic.twitter.com/r2HfVIq1Mm