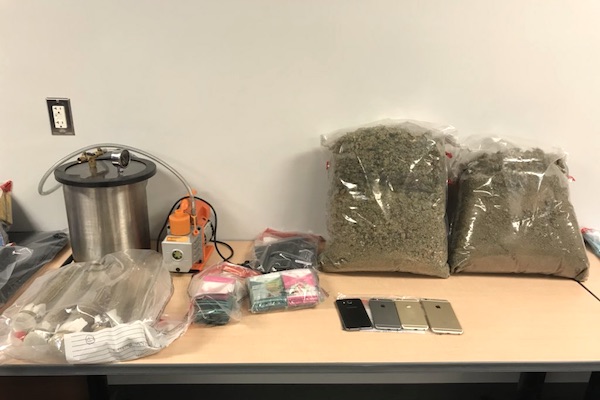 Drugs seized during raids in the East St. Paul and Lord Roberts areas on May 18. Winnipeg police have created a new Drug Enforcement Unit to tackle the rise of illicit drugs on city streets. (WPS / HANDOUT)

Winnipeg police have created a dedicated unit to tackle the rampant problem of methamphetamine and opioids on city streets.

The Drug Enforcement Unit builds on an existing police relationship with Addictions Foundation of Manitoba and will focus on detection, disruption, and dismantling of individuals and or groups who traffic illicit drugs.

The unit’s creation comes days after Winnipeg police and RCMP raided homes in the East St. Paul and Lord Roberts areas. Officers seized more than $120,000 worth of cocaine, $26,000 worth of marijuana, $50,000 in cash and other items on May 18.

Police say the new unit will utilize three components as part of their mandate: enforcement, intervention, and education.

Police plan on mobilizing their resources, engaging with the community and collaborating with partner agencies in order to build a safer, stronger and healthier community.

“Working in partnership with the WPS, we hope to better address these issues and redirect people to the appropriate care with the goal of achieving better outcomes for persons suffering from addictions and mental health issues and equally building a better and safer society for all,” said Dr. Ginette Poulin, medical director of the Addictions Foundation of Manitoba.

Police say anyone with information on the trafficking of illicit drugs can contact Crime Stoppers anonymously at (204)786-TIPS (8477).