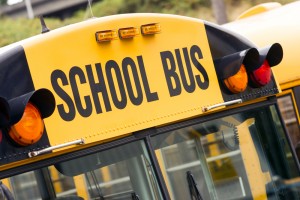 A 64-year-old Winnipeg woman was carjacked on Wednesday before the suspect crashed her vehicle into a school bus, say Winnipeg police.

The robbery happened at around 3 p.m. in the 1700 block of Henderson Highway.

Police say the man demanded the keys to the woman’s 2008 Honda Civic and was involved in an accident moments later in the area of Lagimodiere Boulevard and Headmaster Row. He tried to flee, but witnesses held him for police.

Police say the vehicle was speeding on eastbound Lagimodiere at McIvor Street and caused a one-ton dump truck to swerve out of the way. The driver eventually lost control while weaving in and out of northbound traffic and did a 180-degree spin in a heavily congested construction zone. The stolen vehicle then drove into the southbound lanes and crashed into a school bus before coming to a rest in a ditch.

No children were on the bus at the time and the driver suffered only minor injuries.

The female victim, whose vehicle was originally stolen, wasn’t injured.