Portage and Main Could Partially Open to Pedestrians in Fall 2019 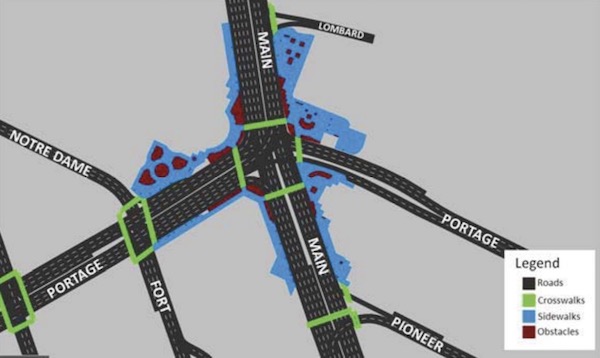 Portage and Main could partially open to pedestrians by the fall of 2019. (CITY OF WINNIPEG)

One of four crossings at the intersection of Portage and Main could finally open to pedestrians in the fall of 2019.

The City of Winnipeg plans to remove a barrier at the iconic intersection within 18 months following a request for proposals posted on the city’s website on Tuesday. Portage and Main has been closed to pedestrians since 1979.

The first piece of the puzzle is to have pedestrians cross at Portage Avenue East between Richardson Plaza and the Bank of Montreal.

In its RFP, the city is seeking a consultant to plan and design the reopening process at all four corners of the intersection.

The city has already committed $3.5 million towards intersection enhancements, such as improving sidewalks and overall design of the area.

The RFP states that work on the underground concourse is not included and will be managed by another contract separate from the intersection project.

A timeline on when all four corners of the intersection could eventually flow with pedestrians isn’t yet known. Mayor Brian Bowman originally campaigned on opening up the intersection to foot traffic in 2014. Bowman is up for reelection this fall.

The deadline for consultants to bid on the opportunity is June 26.