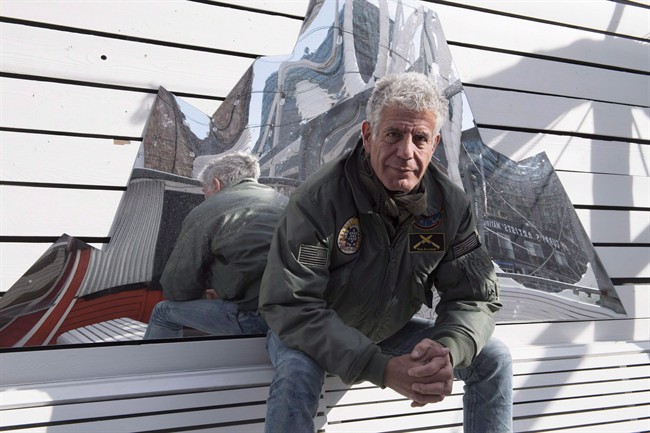 Anthony Bourdain poses for a photo during an interview with The Canadian Press in Toronto on Monday, October 31, 2016. Renowned chef Anthony Bourdain has been found dead in France while working on CNN program. THE CANADIAN PRESS/Frank Gunn)

As the world’s best-known celebrity chef, Anthony Bourdain‘s travels took him to the farthest corners of the planet, and in so doing he became a champion of regional cuisines, including those of Quebec and Newfoundland and Labrador.

Bourdain, 61, was found dead Friday in his hotel room in France. He was in Strasbourg filming an upcoming segment of his award-winning “Parts Unknown” series for CNN. The network confirmed the cause of death was suicide.

Last fall, Bourdain travelled to Newfoundland, where he ate fish and chips in Petty Harbour, jigged for cod off the tiny fishing village of Quidi Vidi near St. John’s, and later hunted for moose in the province’s remote and rugged interior.

In 2016, he said three Montreal chefs he’d featured on “Parts Unknown” should be declared national heroes.

“I’m a huge fan and loyalist and evangelical on the subject of Martin Picard and Fred and Dave at Joe Beef. I mean, I think they’re not just good for Montreal. They’re good for Canada. They’re good for the world,” the Emmy-winning television personality told The Canadian Press.

“I’d put all three of those guys on the Canadian currency. If I were in charge of such things they would be national heroes. They’d be iconic figures. The Canadian version of Mount Rushmore would have those three guys up there and maybe Jen (Agg) from Black Hoof (in Toronto) also.”

He said Fred Morin and David McMillan of Joe Beef were the chefs who encouraged him to investigate Newfoundland cuisine.

Local foodies went wild when they heard that Bourdain — described by The Smithsonian as “the original rock star” of the culinary world — was touring the province.

“You know the … commercials about the most interesting man in the world? Bourdain is him in real life,” said one fan on Twitter.

However, Bourdain’s foray to the East Coast was not without controversy — something Bourdain was used to as the culinary world’s “Elvis of bad boy chefs.”

After the Newfoundland and Labrador episode aired, someone asked Bourdain on Twitter why the Montreal chefs were with him on the trip.

One user tweeted: “Why would Anthony Bourdain bring French Canadian snot chefs to Newfoundland? Anthony you did a diservice (sic) to the cuisine and hospitality of Newfoundland.”

Bourdain wasn’t impressed. He fired back, saying it was the two chefs’ “relentless advocacy for Newfoundland” that encouraged him to visit the province.

“Why were two ‘Frenchies’ on the last (episode) of Parts Unknown Newfoundland? Because they were solely responsible for enticing me there,” he said on Twitter.

However, Bourdain’s reference to “Frenchies” sparked more controversy, with some calling him “salty and rude.”

Others rallied to his defence.

“To the people upset about the Quebec chefs in Parts Unknown, first stop being so foolish. Second, they are the ones who kept urging Bourdain to do a show in Newfoundland. Stop being a tool,” Steven Davis tweeted in response.

Those behind the production of Bourdain’s show also took online heat for using the term “Newfie” in a tweet promoting the episode, with people informing Bourdain that many in the province consider the term offensive.

The official “Parts Unknown” Twitter account had shared an article citing Newfoundland-related books and local slang, saying “Embrace the Newfies as they are.”

The show acknowledged the criticism on Twitter and offered an apology.