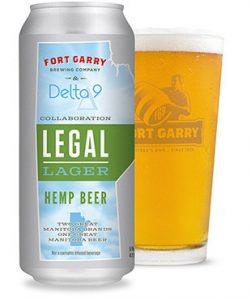 WINNIPEG — A local medically-licensed marijuana producer has partnered with Fort Garry Brewing Company to launch a hemp-infused beer ahead of Canada’s legalization of recreational marijuana in July.

Delta 9 Legal Lager is now on store shelves at Manitoba Liquor Mart stores across the province.

“It’s quite unique in the industry and there’s not a lot of hemp beers available. We wanted to add a little more complexity to this beer, as well as showcase the hemp itself.”

Delta 9 provided the raw hemp material for the beer while Fort Garry Brewing is leading production and marketing. Both companies shared the cost of research and development.

Legal Lager is an alcoholized beer infused with material from hemp seeds, and therefore contains no cannabis or any other psychoactive agent produced from the cannabis plant.

Both companies, however, are aiming to jointly produce a cannabis beer that contains THC. Such a product would still require approval from Health Canada and the province before being sold to the public.

Delta 9 CEO John Arbuthnot says Legal Lager won’t give drinkers a hangover and will find itself competing with alcohol or soda pop this summer.

“We see this as a great partnership between two of Manitoba’s best-known brands,” Arbuthnot added. “Fort Garry Brewing is one of the best craft brewers in Canada and they make my favourite beer, while Delta 9 is truly Manitoba’s own cannabis producer.