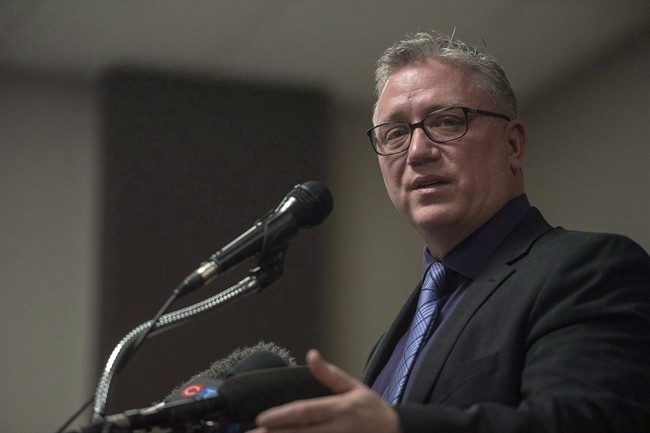 Kevin Garinger, President of the Humboldt Broncos, speaks during a media event at Elgar Petersen Arena in Humboldt, Sask., on Sunday, April 8, 2018. The Humboldt Broncos hockey club says it has received so many applications to become the team’s new head coach and general manager that it needs more time to review them all. (THE CANADIAN PRESS/Liam Richards)

HUMBOLDT, Sask. – The Humboldt Broncos hockey club says it has received so many applications to become the team’s new head coach and general manager that it needs more time to review them all.

The new hire will replace Darcy Haugan, who was one of the 16 people who died as a result of the April 6 crash involving the team bus and a truck in rural Saskatchewan.

Thirteen others were injured.

The Broncos’ organization announced last month that it will have a team ready to hit the ice in time for the 2018-19 Saskatchewan Junior Hockey League season.

Humboldt Broncos’ president Kevin Garinger says the club is humbled and overwhelmed by the sheer volume of applicants for the head coach and general manager position.

He says there are so many good people they need more time.

“We are thrilled with the exceptional experience, background and competencies of all of the candidates who have applied, and because of that level of interest, and given the complexity of the situation, we are committed to taking the necessary steps to ensure that we select the very best person,” Garinger said Friday night in a release.

“The successful candidate will have the skills, abilities, knowledge and personal attributes to lead our organization into the next season, and we are prepared to take the additional time required to get there.”

Garinger says since the crash the club has signed players who attended a free agent camp and selected others in various drafts.

He says the Broncos continue to fill the team player list and will hold an August training camp.

“As we undertake the monumental task of rebuilding our team, one of our main priorities remains, as it has from the very beginning, on supporting our families,” Garinger said.

“We appreciate the interest in our organization and the support we continue to receive from across the globe.”