By Janice Dickson, The Canadian Press 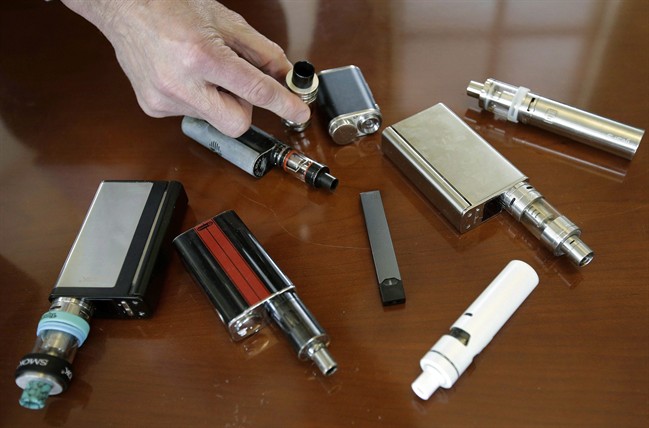 Vaping devices that were confiscated from students at Marshfield High School in Marshfield, Mass., are shown in an April 10, 2018 file photo. Health Canada is looking for a contractor to develop, implement and report on a national vaping awareness program, including finding social media influencers that teens might be willing to listen to. (THE CANADIAN PRESS/AP/Steven Senne)

OTTAWA – Wanted: social media celebrities to warn teens of the risks of vaping.

Health Canada is looking for a contractor to develop, implement and report on a national vaping awareness program, including finding social media influencers that teens might be willing to listen to.

“Canadians look for information from a variety of sources, and youth, in particular, are more likely to engage with other influencers beyond government, or health professionals,” said a spokesperson from Health Canada.

One of the goals of the contractor is to find social media trend-setters with a lot of followers and influence who can encourage youth and young adults to attend events and spread Health Canada’s message online about the risks associated with vaping.

The search for a contractor comes just one month after the federal government passed a new law formally legalizing and regulating vaping, or e-cigarettes, and which also aims to stamp out any lifestyle aspects of vaping that might appeal to teens.

It also allows the legal manufacture, import and sale of vaping products, both with and without nicotine.

Finding online celebrities won’t be the contractor’s only job. In fact, he or she will be responsible for developing a strategy and plan for a national marketing events program and for developing, implementing and managing the awareness campaign.

Health Canada considers vaping products to be harmful, although not as harmful as smoking cigarettes. It is concerned about the particular appeal of vaping to teens and its potential to promote tobacco use. And the department says there is clear evidence that exposure to nicotine adversely affects cognitive function in the developing brains of adolescents.

The national vaping campaign will target youth aged 15-18 and non-smoking young adults aged 19-24 to help them understand the risks and to help parents and teachers with resources they need to have conversations about the health risks of vaping products.

Health Canada says the contract is expected to start in the fall.