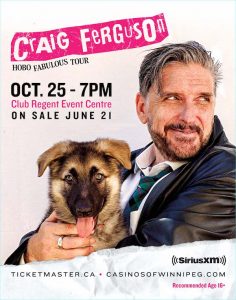 Comedian Craig Ferguson is bringing his Hobo Fabulous Tour to Winnipeg in the fall.

The show promises completely new material from the actor-comedian, who was previously the host of CBS’ “The Late Late Show with Craig Ferguson.”

Tickets go on sale Thursday, June 21 at Ticketmaster and CasinosofWinnipeg.com starting at $40.