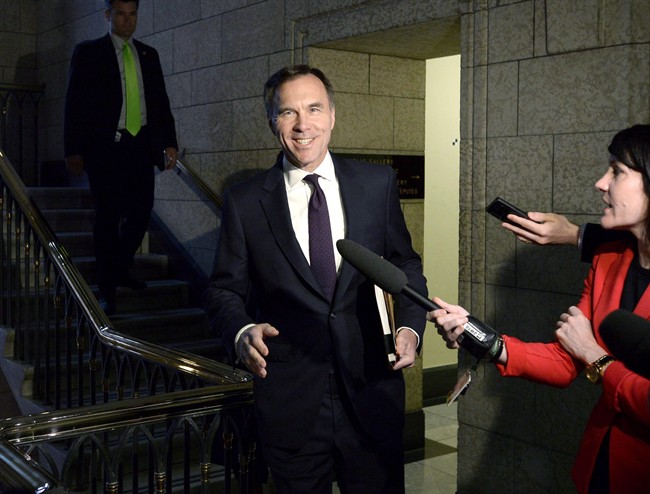 Minister of Finance Bill Morneau arrives for a cabinet meeting on Parliament Hill in Ottawa on June 4, 2018. The federal ethics commissioner says Finance Minister Bill Morneau did not violate any conflict of interest laws in sponsoring a pension bill last year. Morneau found himself in hot water when he introduced pension-reform legislation, which critics insisted would benefit Morneau Shepell, his family company. (THE CANADIAN PRESS/Justin Tang)

Morneau found himself in political hot water when he introduced the pension-reform legislation, which critics insisted would benefit Morneau Shepell, his family company. The finance minister rejected the allegations, which were among a series of ethical questions he faced late last year.

The ethics watchdog received two requests for an investigation into Morneau’s involvement in the bill.

Ethics commissioner Mario Dion said in his report that neither request met the standards required for an investigation, but the allegations were worrisome enough that his predecessor decided to open a full probe anyway.

Dion’s ruling concluded that since the bill affects all federally regulated private-sector employers, certain Crown corporations and all pension plan administrators, it is “of general application” in the words of the conflict of interest law.

That wording meant that Morneau’s stake in the company and those of his relatives, don’t fall under the scope of the law, Dion said.

Morneau didn’t place himself in a conflict of interest or contravene the law, the report found.

In a statement, Morneau thanked Dion and the commissioner’s office “for their diligence and hard work” in bringing the matter to a close.

“I have always — and will always — hold myself to the highest standards,” the statement said. “That is why since being elected I have worked with and sought guidance from the ethics commissioner’s office at every turn.”

Conservative finance critic Pierre Poilievre called the conclusions surprising, arguing that Morneau’s decision to introduce the bill was bad judgment, even if it didn’t violate conflict of interest rules.

“For a minister to introduce a pension bill while he owns a significant stake in a pension company, is very problematic even if, as it turns out, it’s not illegal,” Poilievre told reporters outside the House of Commons.