Home » News » Man Alleged to Have Traded Drugs for Sex with Youth: RCMP

Man Alleged to Have Traded Drugs for Sex with Youth: RCMP 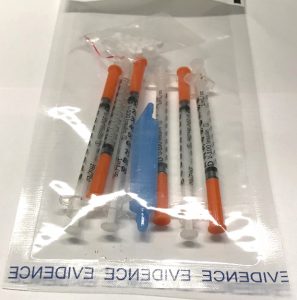 Needles seized during a traffic stop in The Pas on June 12, 2018. (RCMP HANDOUT)

A 64-year-old Alberta man is in police custody after RCMP say he traded drugs in exchange for sex with a male youth.

Opaskwayak Cree Nation RCMP and The Pas RCMP began their investigation into the trafficking of methamphetamine. That led to a traffic stop on the suspect June 12, where methamphetamine was located.

Eric Leonard Richards of Athabasca, Alberta faces three counts of sexual exploitation of a young person, two counts of obtaining sexual services for consideration from a person under 18, possession for the purpose of trafficking and failing to comply with an undertaking.

Richards was living in The Pas at the time of his arrest.