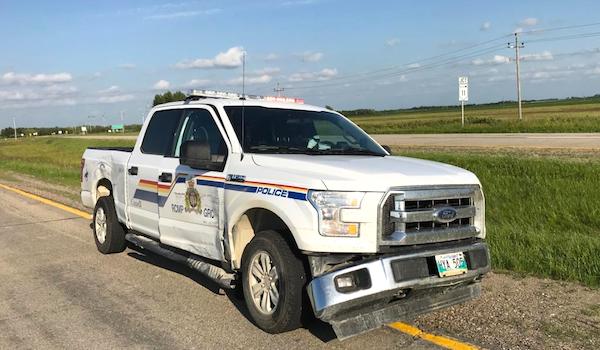 An RCMP pickup truck was damaged on July 7, 2018 when a suspect deliberately drove into it on Highway 11. (RCMP HANDOUT)

Manitoba RCMP had their hands full last weekend trying to arrest a man who eventually drove his vehicle into a police pickup truck.

Police received two reports of an impaired driver on July 7 in the Lac du Bonnet area. They were eventually able to locate the suspect vehicle on Highway 11 near the intersection of Highway 214.

The driver didn’t stop and was driving erratically as Mounties tried to pull him over. The suspect eventually pulled over and briefly got out of his truck, but hopped back in and accelerated backwards into the police cruiser. He drove away, but was quickly stopped.

Police say that’s when the suspect got out and threw a bat and an axe at the police vehicle. As police were able to move in and make an arrest, the suspect spit on one of the officers.

Police say both the officer and Lasko received minor injuries.