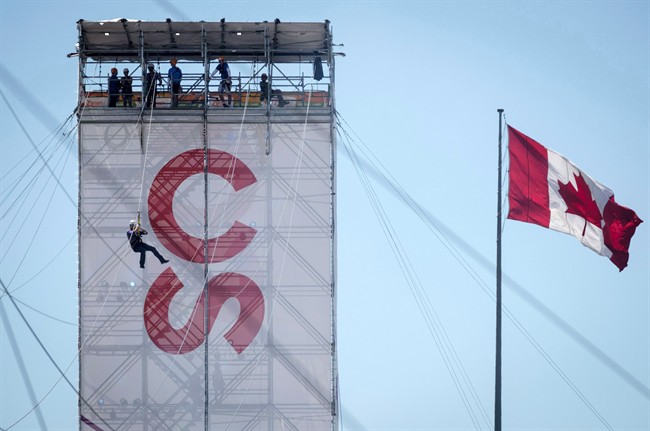 A visitor slides down a zip line during the Calgary Stampede in Calgary, Sunday, July 8, 2018. The Calgary Stampede says its annual display of Indigenous culture that goes back over 100 years will no longer be called Indian Village. On Sunday, the final day of the 2018 Calgary Stampede, officials announced the village of more than two dozen teepees will be called Elbow River Camp. (THE CANADIAN PRESS/Jeff McIntosh)

CALGARY – The Calgary Stampede says its annual display of Indigenous culture that goes back more than 100 years will no longer be called “Indian Village.”

On Sunday, the final day of this year’s Stampede, officials announced the village of more than two dozen teepees will be renamed Elbow River Camp.

Stampede CEO Warren Connell said in a news release that the change was led by the teepee owners with support from the Stampede, noting the owners made the final decision.

Michael Meguinis, a spokesman for the owners, said the name “Indian Village” never bothered him. But he said it’s no longer accepted by some people, so it’s time for a change.

His wife, Violet, said European visitors were often confused or had trouble with the old name.

“For the international community — and this is an international event — I think it makes people comfortable to say that we’re Indigenous and that’s fine with us,” she said.

The village has been a major part of the Calgary Stampede since its inception in 1912.

Each of the 26 teepees in this year’s camp has a unique design on the outside.

The teepee owners are from Treaty 7 Nations of Kainai, Tsuut’ina, Stoney Nakoda, Siksika and Piikani. They live inside their teepees during the Stampede and take turns opening them up to the public for viewing, while showing family artifacts and answering questions about Indigenous culture.

Many of the owners are descendents of the people who set up the first village, and a few resisted changing the name.

The Stampede noted in its news release that for many of the participants, the old name honoured the relationship of the teepee owners with the Stampede and its founder, Guy Weadick.

Michael and Violet Meguinis, who are from Tsuut’ina First Nation southwest of Calgary, explained that when the Calgary Stampede started, the Indian Village was a way for Indigenous people to leave their reserves. At that time, First Nations people needed permission from a government Indian agent to leave their territory.

Part of the reason to change the name now, Michael Meguinis explained, was that the location of the village moved two years ago and teepee owners had been debating new names. The list of suggestions was whittled down to two and a vote was held Tuesday. The name that lost was “Treaty 7 Camp.”

The Calgary Stampede said that in Dene, Stoney, and Blackfoot the word for Calgary refers to the bend in the Elbow River — the elbow — and that for generations, when teepee-owning families came to the Stampede, they would point to their elbows.

“One of our natural laws is that change is part of this world and we always say Mother Earth is always changing. So this is a change. This is a positive change,” Violet Meguinis said about the new name.

The Calgary Stampede said the name change is effective immediately, and that a closing ceremony for the camp was to be held Sunday afternoon.

—By Rob Drinkwater in Edmonton