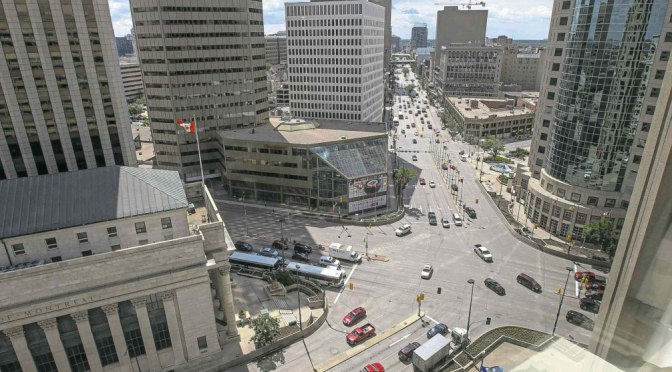 When Winnipeggers go to the polls in October, they will not only have to choose a mayor and council, but whether they would like to see Portage and Main reopened to pedestrians.

Mayor Brian Bowman said Wednesday he will be supporting a council motion recommending a referendum on the future of Winnipeg’s most iconic intersection.

“The debate over whether or not to open the intersection to pedestrian traffic has demanded a lot of attention and while important has taken away from other pressing issues facing our growing city that require more attention and debate.”

Bowman has long been a champion for reopening the intersection to pedestrians. Critics say allowing people to cross on foot will impede traffic flows and become a safety concern.

“Since taking office, I have been listening to both sides of this debate very closely, and I agree Winnipeggers should be provided an opportunity to have a direct say on this matter,” Bowman added.

A budget of $3.5 million has already been set aside by city council to pay for upgrading the intersection’s surface, designing a crossing and making improvements to the nearby underground concourse.

Bowman says no incremental administrative costs are required with the addition of a single, yes/no question making a referendum on the opening of Portage and Main to pedestrian traffic a cost-effective way for council to engage Winnipeg residents.