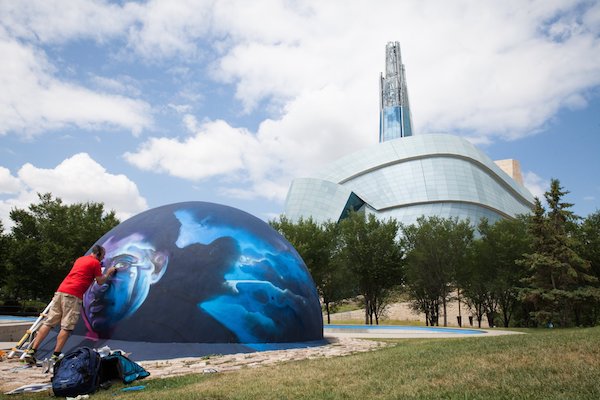 Artist Mr Cenz began working on a mural to honour the late founder of Sk8 Skates at The Plaza Skateboard Park on Friday. (THE FORKS)

WINNIPEG — A new mural at The Forks is honouring the late founder of Sk8 Skates for his community activism and helping to pioneer Winnipeg’s skateboard scene. 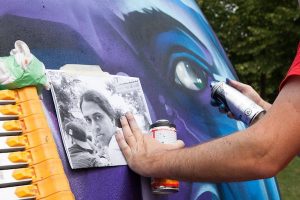 Jai Pereira’s likeness is making up part of the mural’s design on the park’s bowl. (THE FORKS)

Jai Pereira is being remembered as the Graffiti Gallery marks its 20th anniversary with London-based artist Mr Cenz in the city to complete a mural at The Plaza Skateboard Park.

“Our longstanding partnership with the Graffiti Gallery has allowed us to support some fantastic art projects in The Plaza,” said Paul Jordan, CEO of The Forks.

“It is great to see this piece coming together in honour of Jai — someone who really contributed to fostering the skateboarding community in Winnipeg.”

Pereira was killed in a vehicle crash in 2001 and Colin Lambert took over the reigns of the business in the years that followed. The current owner was hired by Pereira when he was a teen.

“Though he’s not with us today, Jai’s impact has been felt across the Winnipeg skateboard community. I am forever grateful for everything he’s given us, and I am stoked that he’s being honoured in this way at The Plaza — and that he may be able to continue inspiring young skateboarders the way he inspired me.”

The mural is expected to be completed this weekend.

← Previous: Growing Knowledge: From the Farm to the Table Next: Food Musings: Era Bistro at the Canadian Museum for Human Rights →
Tags: The Forks | Winnipeg