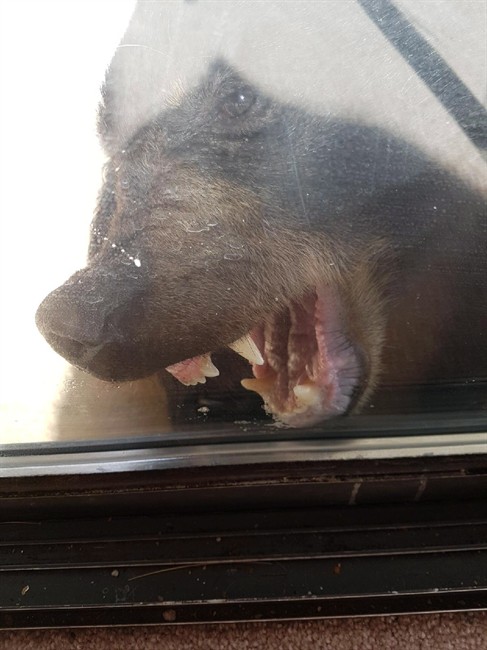 A black bear attempts to chew on a patio door as it tries to get into a home in Gibsons, B.C., in this August 19, 2017 file photo. (THE CANADIAN PRESS/HO – RCMP)

An eight-year-old girl was injured over the weekend when a black bear attacked her tent at a backcountry campsite on South Cross Lake.

Manitoba Sustainable Development says the attack happened on Saturday and the girl suffered cuts to her face. She was treated and released from hospital, but is said to be in otherwise good condition.

The province says the family took the appropriate safety precautions including hanging food in a bear-proof barrel in a tree away from the campsite, and removing or reducing other attractants at the site. After the bear swiped the tent, injuring the girl, it climbed a tree and tried unsuccessfully to get into the food barrel. The girl’s father was able to scare the bear away from the campsite, which allowed the family time to gather some essentials, alert other campers and get into their canoe so they could get to their vehicle.

The province says it’s unlikely the bear in this incident is the same animal who attacked a man hiking on the Mantario Trail July 2, which is more than 30 kilometres away.

Conservation officers are searching for the bear and there is an effort to trap it, but it was last seen swimming away toward Caddy Lake. The back-country campsite where the attack took place has been closed for the time being.

Tips on how to protect yourself from wildlife and avoid a similar bear attack can be found on the province’s website.