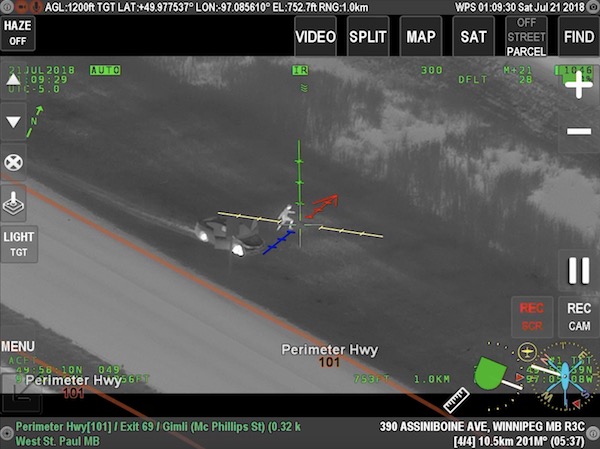 A still frame from the Air 1 police helicopter during a pursuit and arrest of an alleged kidnapper on Saturday, July 21, 2018. (WPS / HANDOUT)

An erratic driver accused of kidnapping a woman and taking her on a high-speed chase was caught by Winnipeg police in a dramatic takedown last weekend.

Officers first spotted the man driving erratically on Saturday shortly before 1 a.m. in the area of McGregor Street and Jarvis Avenue. The vehicle ran a stop sign and police began to follow.

Air 1 was called in to track the suspect as the driver continued to evade police (watch video below).

The police chopper tracked the man through the city as he sped through several red lights and stop signs. He eventually turned onto the north Perimeter Highway where officers deployed two Stop Stick devices to puncture the vehicle’s tires. While on the Perimeter, the suspect turned into the westbound lanes and drove eastbound against oncoming traffic, reaching speeds of upwards of 170 km/h.

One of the vehicle’s tires deflated as a result of the Stop Stick and the vehicle came to a gradual stop near a ditch. The driver jumped out and took off on foot into a nearby field, where police quickly moved in and arrested him.

Other officers attended to the vehicle, where they discovered a woman had been taken against her will from her home in the Weston area earlier in the evening.

A police spokesperson says the man isn’t being named because the incident is domestic in nature.

VIDEO: @wpgpolice performed a dramatic takedown last Saturday when they caught up to a man suspected of kidnapping a woman. Speeds reached up to 165 km/h on the Perimeter. pic.twitter.com/5IM02n9T76