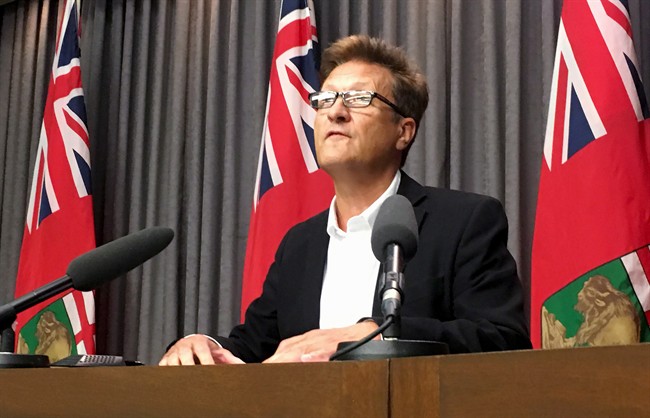 The Manitoba government says it won’t proceed with plans to further privatize the province’s air services unless private-sector bidders prove they can provide the same level of service and safety and better value. Manitoba Infrastructure Minister Ron Schuler speaks to media in Winnipeg on Thursday, July 26, 2018. (THE CANADIAN PRESS/Steve Lambert)

WINNIPEG – The Manitoba government said Thursday it won’t proceed with plans to privatize the province’s air services unless bidders prove they can maintain the same level of service and safety, while also providing better value.

The Progressive Conservative government recently put out a request for proposals for private firms to operate the province’s water bombers, airplane ambulances and other aircraft.

The idea has upset the Manitoba Government and General Employees Union, which says private firms are unlikely to maintain current levels of service and ensure aircraft are always available.

“Today, we once again ask the government to withdraw their proposal to privatize these vital, public emergency services.”

The MGEU released a 42-page report that raised questions about privatization.

Unlike government planes, private jet ambulances are not allowed under federal regulations to land at short gravel runways in several northern communities, the report said. Water bombers are currently available throughout the year, but private contractors may not cover shoulder seasons in spring and fall, the report added.

Gawronsky also said there is no guarantee that private operators will maintain the same level of service.

Infrastructure Minister Ron Schuler rejected the assertion. The province is still accepting bids for another two weeks and any contracts will ensure safety requirements are maintained, he said.

“We want to make sure that, first of all, the same safety and the same response — at a minimum — are provided, and see if they can do it at a better price,” Schuler said.

Private jet ambulances should be able to get federal permission to use short gravel runways because they would be working for the province, he added.

Schuler also said the province will back down on its privatization plan if the private-sector bids are not good enough.

He pointed to the government’s decision last year to look at public-private partnerships to build new schools. The government eventually quashed the idea after analyzing the costs and benefits.

Some of the province’s air services are already operated by the private sector, including the non-profit STARS helicopter ambulance service.