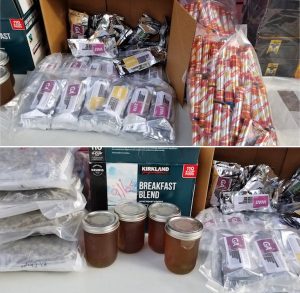 Other seized items include 75 pounds of cannabis shatter, oils, and edibles. (RCMP HANDOUT)

Manitoba RCMP say they have made the largest marijuana bust through a traffic stop in Canada since 2015.

Officers on patrol pulled over a semi-trailer truck on the Trans-Canada Highway near West Hawk Lake on July 22 as part of a regulatory inspection of the driver’s paperwork.

Police say discrepancies were found and the load was examined as a result. Officers found 925 pounds of vacuum-packaged marijuana, as well as 75 pounds of cannabis shatter, oils and edibles hidden among the legitimate load of food products.

Claudiu Huber, 46, from Agassiz, BC, was arrested and charged with possession for the purpose of trafficking and trafficking a controlled substance. He was released on a promise to appear.

The Mounties say the semi originated in Lower Mainland B.C. and was destined for southern Ontario.