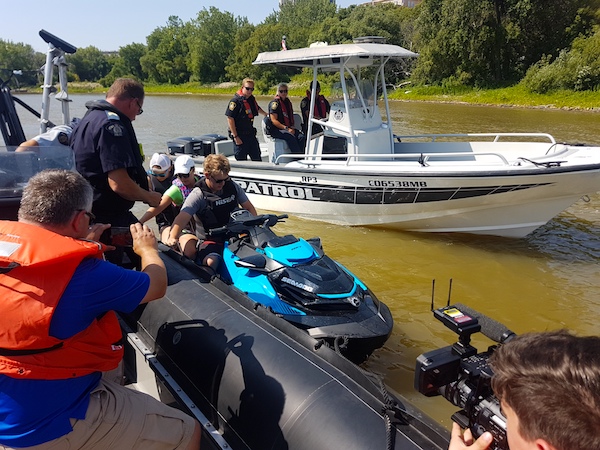 RCMP check three people on a jet ski on the Red River while members of the Winnipeg police look on, Monday, July 30, 2018. (HANDOUT)

WINNIPEG — With the August long weekend just around the corner, police in Manitoba, the Canadian Safe Boating Council and Lifesaving Society are launching the sixth annual Operation Dry Water initiative.

The campaign is a reminder of the risks associated with drinking and boating, which accounts for 64 percent of all boating-related fatalities in Manitoba. Nationally, the statistic is 40 percent.

“Each year I look at the new drowning reports and a common trend appears; boating is a significant contributor to drownings, and the majority had alcohol as a factor in those deaths,” said Kevin Tordiffe, acting CEO of the Lifesaving Society Manitoba Branch.

“Please, this year let’s all make an effort to reduce these numbers; boat sober, wear a lifejacket and maybe this year, if you see someone boating and drinking, don’t stay silent.”

Sgt. Bob Chabot of the Manitoba RCMP says while summer is all about having fun, the joys of being on the water can come to a crashing halt if someone gets seriously injured or dies because of a decision to boat while impaired.

“The RCMP will be out on the water during Operation Dry Water to help keep it safe, which will keep it fun,” Chabot said.

The campaign is also aimed at fostering a stronger and more visible deterrent to alcohol and drug use while boating, especially with recreational marijuana becoming legal this fall.