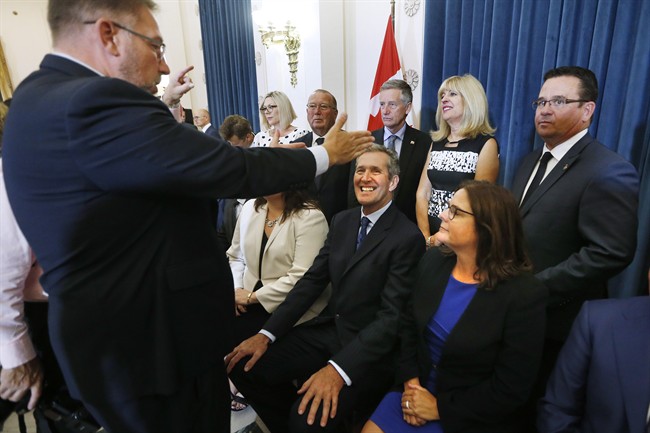 Premier Brian Pallister, centre, and his ministers get posing instructions during a team photo after he announced a cabinet shuffle at the Manitoba Legislature in Winnipeg on Wednesday, August 1, 2018. (THE CANADIAN PRESS/John Woods)

WINNIPEG – Manitoba Premier Brian Pallister has made major changes to his cabinet roughly midway through his mandate, swapping ministers in Health, Finance and other high-profile portfolios.

One backbencher, Colleen Mayer, was promoted to cabinet in the Crown Services role, and one minister, former Education head Ian Wishart, was demoted to the backbench.

“It’s a refresh and it’s a pretty normal practice, I think, in most governments provincially and federally,” Pallister said of the shuffle Wednesday.

“We’ve got some people who are very much up for the challenges that lie in front of them.”

Pallister said the changes are a “strategic repositioning” as the Progressive Conservative government tries to reduce the deficit and restore public services before the next election in October 2020.

The Tories have promised to end a string of deficits, started by the former NDP government, before 2024.

Goertzen’s departure from Health follows sweeping cost-cutting measures, including the closure of three hospital emergency rooms in Winnipeg. Now in Education, he’ll be tasked with a review of the province’s elementary and high school systems.

The Opposition New Democrats said Goertzen’s move is a bad signal for schools.

“He’s going to be seen as the face of major cuts to the education system,” said NDP health critic Andrew Swan.

Wishart said he did not ask for the demotion from cabinet and plans to run for re-election in 2020. He has been charged with helping Goertzen with the school review and said he welcomes the role.

“The (review) is probably the most significant change in education in a generation,” he said.

Mayer, the only new minister, will be tasked with fixing troubles at Manitoba Hydro. Board members resigned en masse earlier this year and the Manitoba Metis Federation has launched a lawsuit over a proposed benefits agreement the government quashed.

Mayer, who is Metis and a member of the federation, said she hopes to find solutions.

“There’s lots of challenges for sure, but there’s great opportunities as well, and I look forward to rolling up my sleeves and getting into that.”

The cabinet shuffle came on the same day a new opinion poll suggested the Tories continued to enjoy a strong lead over other parties.

Fourteen per cent of respondents were undecided.

The poll surveyed 896 Manitobans between July 15 and 17 via interactive voice response on landlines and cellphones, and it’s considered accurate within plus or minus 3.27 per cent, 19 times out of 20.