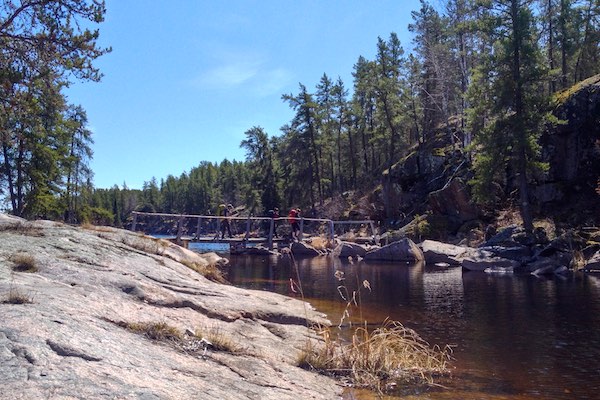 Hikers make their way across a bridge over Olive Lake along the Mantario Trail. (WIKIPEDIA)

The province has reopened a section of the Mantario Trail that was closed July 2 following a bear attack on an area hiker.

The trail is now reopen to the public from the Big Whiteshell Trail Head to Mantario Lake.

A black bear injured a hiker last month when he was bitten on the back of his leg. Attempts to capture the bear have been unsuccessful and officials say the bear could still be in the area.

Manitoba Sustainable Development reminds campers, hikers and outdoor enthusiasts to be aware of the presence of wildlife and to be ‘Bear Smart.’

Elsewhere in Manitoba, an eight-year-old girl was scratched in the face July 21 when a bear tried to enter her tent while camping on South Cross Lake. The incident was about 30 kilometres away from the Mantario Trail encounter.