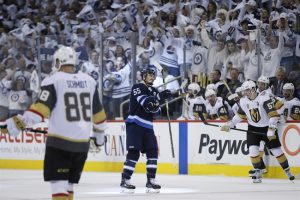 Winnipeg Jets’ Mark Scheifele (55) reacts after scoring against the Vegas Golden Knights during the second period of game one action in the NHL Western Conference Final in Winnipeg on Saturday, May 12, 2018. (THE CANADIAN PRESS/John Woods)

“There is such a great team who worked on raising this incredible amount of money for kids; from all the guys who gave their time helping out, to all the KidSport volunteers,” said Scheifele, KidSport Winnipeg athlete ambassador.

The sold-out two-day hockey camp was held at Bell MTS Iceplex and hosted 224 kids between the ages of five and 12.

The cumulative total raised since the camp and golf tournament’s inception in 2015 is $620,000. All proceeds from both events will pay registration fees for kids in Winnipeg so they will be able to participate in sports.