Home » Columns » When Three’s Not a Crowd: Jackman-Atkinson

When Three’s Not a Crowd: Jackman-Atkinson 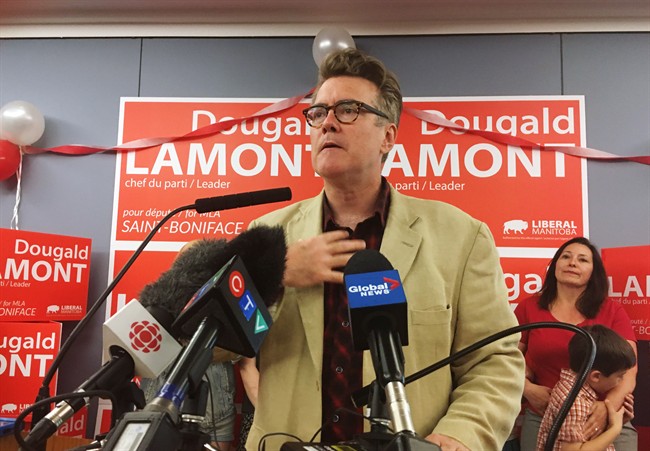 Manitoba Liberal Leader Dougald Lamont addresses supporters after winning a provincial byelection in Winnipeg on Tuesday, July 17, 2018. Armed with a new legislature seat and more clout for his long-suffering party, Manitoba Liberal Leader Dougald Lamont says he intends to fight against the Progressive Conservative government’s cost-cutting agenda and for public spending to stimulate the economy and reduce the deficit. (THE CANADIAN PRESS/Steve Lambert)

NEEPAWA, Man. — Westman residents can be forgiven for forgetting that a provincial byelection just took place. While usually dull affairs, that wasn’t the case this time and the outcome could have an interesting impact on the province’s political future.

When the polls closed in the St. Boniface riding on July 17, the results were surprising.

The seat had been held by the New Democratic Party (NDP) MLA and former premier Greg Selinger since 1999. The NDP, the province’s Official Opposition, considered it a safe seat. Voters had other ideas; instead of returning the NDP to the Leg via candidate Blandine Tona, new Liberal leader Dougald Lamont won the seat with 2,636 votes, or 42 percent of the ballots cast. The NDP was a distant second, with 1,782 votes or 28.44 percent. The governing Progressive Conservatives (PC) finished fourth, behind the Green Party, with 826 votes. The by-election attracted almost 47 percent of eligible voters, which is a decent turnout when you consider that in the 2017 Point Douglas by-election, only 31 percent of eligible voters cast ballots and in the 2016 general election, only 63 percent of St. Boniface voters and 57 percent of all Manitobans cast ballots.

This by-election result certainly makes things interesting. With Lamont’s win, the Manitoba Liberals now have four seats and official party status for the first time in 23 years. This opens the door to more funding for the party and allows Lamont, who was chosen as the party’s leader last October, to ask questions of PC premier Brian Pallister and his ministers during question period.

There’s a long way to go for the Liberals to recreate their 1988 peak of 20 seats and Official Opposition status, under leader Sharon Carstairs, but conditions could be ripe come the next general election in 2020. The party’s 1988 victory was thanks to the support of centre-left voters who were unhappy with the unpopular NDP government under Howard Pawley.

It’s more of the same 30 years later. After being relegated to Official Opposition in the 2016 election, the NDP still can’t seem to find their footing, despite electing a new leader last September. The NDP now has only 12 MLAs, their lowest number since 1988, and is lot of baggage from almost 20 years in power.

While the NDP is likely to be on the losing end of any gains made by the Liberals, the Conservatives aren’t entirely out of the woods. There won’t be any short-term implications; the PCs still hold a majority and can pass bills without the support of other parties. However, they won the last election on a wave of discontented voters who wanted a change from the NDP, who had been in power since 1999. A series of moves aimed at trimming the budget have upset many voters. With a third option, the PCs need to, at a minimum, do a better job of explaining why the cuts are needed and what impact they will really have on frontline services, which is top of mind for many voters.

Sitting in the ideological middle, the Liberals have the potential to pick up centrist voters from both sides of the political spectrum and could be a wildcard come 2020. I don’t like a two-party system, there’s too much incentive to govern for the fringes, not the majority. There’s too much antagonism and us-versus-them. Having three viable parties means that if they want to win, all parties must pay attention to the majority and that’s a good thing for the majority of our province’s residents. Keeping our politicians on their toes is never a bad thing.