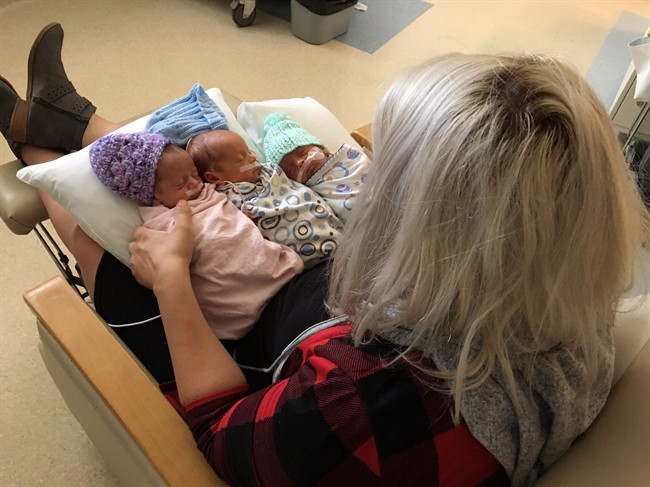 A Saskatchewan woman who had to perform CPR on one of her newborn triplets says all three babies are currently doing awesome. Danielle Johnston holds her new triplets Karlee, Liam and Jack in an undated handout photo. (THE CANADIAN PRESS/HO-Danielle Johnston)

REGINA – A Saskatchewan woman who had to perform CPR on one of her newborn triplets while still in labour with the other two says all three babies are doing awesome.

Danielle Johnston says her triplets, Karlee, Liam and Jack, are all in the neonatal intensive care unit at a Regina hospital and will stay there for another two weeks.

Johnston started getting wicked contractions on her bathroom floor in Griffin, Sask., on July 16.

Karlee was born soon after, although Johnston noticed that her breathing wasn’t right and so she started performing CPR until an ambulance arrived.

When paramedics arrived over 45 minutes later, they put an oxygen mask on Karlee, who was born at 32 weeks.

Johnston was taken to a nearby Weyburn hospital before being transported to Regina where she had a caesarean section for Liam and Jack.