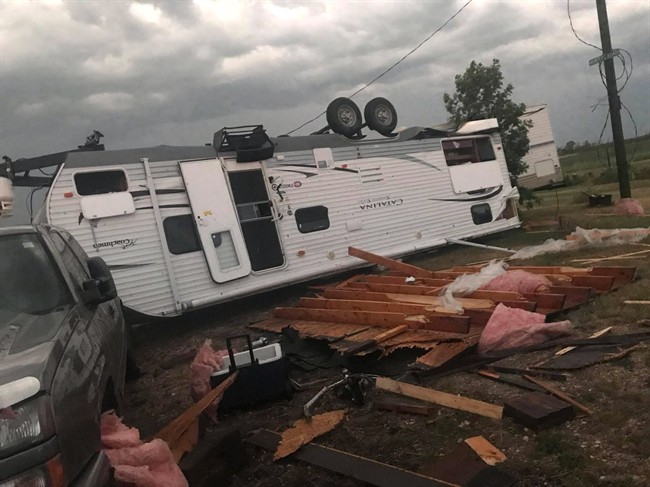 An overturned trailer is shown after a tornado at Margaret Bruce Beach, east of Alonsa, Man., on Friday, Aug.3, 2018. A tornado that touched down west of Lake Manitoba on Friday night tore at least one home off its foundation, a spokesman for Environment Canada said Saturday. (THE CANADIAN PRESS/HO-Facebook-Vanessa Whyte)

ALONSA, Man. – A man has died after a tornado touched down west of Lake Manitoba on Friday night and tore at least one home off its foundation, officials said Saturday.

An RCMP spokesman said the 77-year-old man was found dead outside what remained of his wrecked home in Alonsa, Man., about 165 kilometres northwest of Winnipeg.

“The tornado was down for quite some time so we’re hearing reports of lots of trailers, and damage to vehicles, trees and homes,” said Sgt. Paul Manaigre, adding that no other injuries were reported.

“There’s a lot of damage being reported, and that’s only the tip of the iceburg,” said Environment Canada meteorologist Jean-Philippe Begin.

The reeve of the Rural Municipality of Alonsa said the victim was a retired farmer and schoolteacher.

“He was a personal family friend for years of my whole family,” he said. “Fifty-one years ago, July 29, he stood up for me in my wedding party.”

Some people reported seeing tennis ball-sized hail in the storm that claimed the man’s life, while others said strong winds wreaked havoc.

Annie Richard, 47, captured video of the tornado from her home about two kilometres from where the twister started.

“You hear some people say that it sounds like a freight train,” she said on Saturday morning. “It was just a constant rumble, and it just didn’t stop.”

She and her husband watched the tornado grow and move for about a half hour, filming on her phone, Richard said.

Valerie McInnes fled a beachfront campground with her family on Friday night after they saw a funnel cloud form to the southwest.

After seeing a funnel cloud forming to the southwest, she and her family jumped in their car to flee, she said.

“We drove a little ways away to get out of the path and then went back when it was safe,” said McInnes, noting that their property was intact.

“We’re very lucky, others lost everything,” she said. “We know of three homes that were destroyed in that area.”

“I have a whole new respect for the weather after tonight,” she wrote.

Environment Canada has sent a storm damage team from Winnipeg to the area, which will track the tornado’s path and estimate its strength.

Asham said he never received a warning on his phone. He said there were warnings on TV but wireless service in the area has been spotty or non-existent since the end of May, which he said remains unfixed by service providers, in spite of promises.

“We count on cell service for our emergency services, so this thing is pretty devastating right in the middle of no phone service,” Asham said.

“The only reason now I’m talking to you on my cell now is I’m on a good spot and I’m south of the bad area.”