Alberta’s ‘Sky Promise’ Wins It All at 70th Manitoba Derby 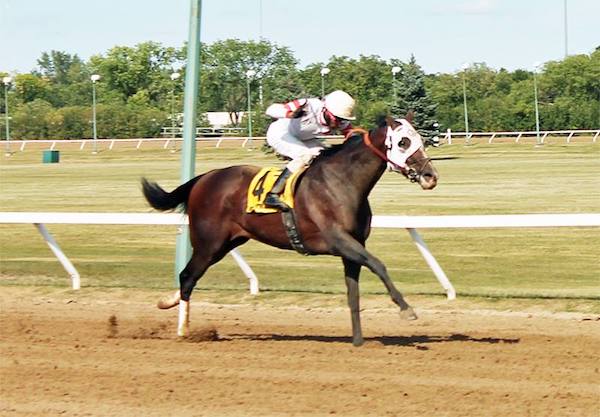 Sky Promise won it all at the Manitoba Derby on Monday, earning his owners $75,000. (ASSINIBOIA DOWNS)

WINNIPEG — Sky Promise was brought into the winner’s circle Monday in a big way, leading the pack to come out as the $75,000 winner at the 70th Manitoba Derby at Assiniboia Downs.

Led by Alberta rider Rico Walcott, he circled the other seven horses in the 1 1/8th mile race to pull away from his stablemate, United Patriot, who had set sharp early fractions. Sky Promise was a slim race favourite and paid $7.20 for a $2 win ticket.

Of the four local horses entered in the Derby, the best finish was by Gary Danelson’s Pete Marwick who finished third.

Sky Promise and United Patriot were two of three horses shipped to the Derby by a top percentage trainer, Robertino Diodoro, a former Calgarian who left hockey in his early 20s to take up a career in horse training. He races primarily in the U.S.

“I can’t say enough good things about Assiniboia Downs (in its treatment of horsemen),” Diodoro said after the race. “Other tracks should take note.”

Sky Promise has an eclectic group of Alberta owners including a dentist, a farmer, a financial counsellor and a trucking firm owner.

— With files from Assiniboia Downs