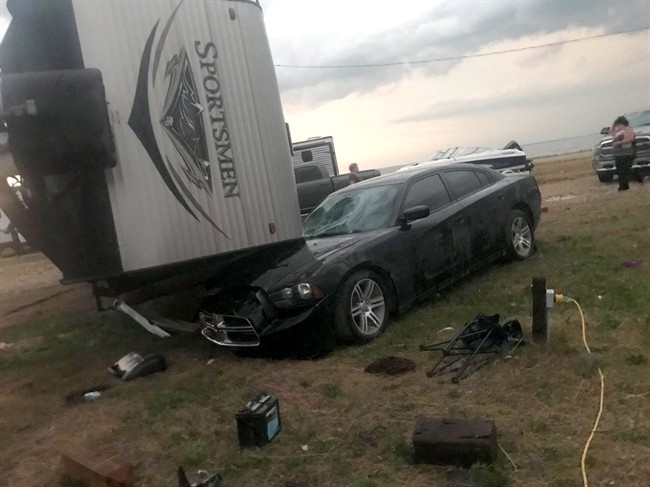 An overturned trailer is shown after a tornado at Margaret Bruce Beach, east of Alonsa, Man., on Friday, Aug.3, 2018. A tornado that touched down west of Lake Manitoba on Friday night tore at least one home off its foundation, a spokesman for Environment Canada said. (THE CANADIAN PRESS/HO-Facebook-Vanessa Whyte)

Manitoba Public Insurance has vehicle damage estimators in Alonsa after an F4 tornado ravaged the community and beach area on August 3.

The tornado claimed the life of a 77-year-old man when it ripped through last Friday evening.

Vehicles and property have been strewn for several kilometres, including into the water of Lake Manitoba at Margaret Bruce Beach.

MPI has established a dedicated toll-free line for residents to make claims by calling 1-800-665-2410.

“Tow truck companies have also been dispatched to the area to remove damaged vehicles from the water and beach area as part of the environmental clean-up effort,” MPI said in a statement.

“Towing of other non-drivable vehicles from private properties can be arranged when reporting claims to MPI.”

Vehicle damage estimators are in the community today and Friday to identify damaged vehicles and prepare initial damage estimates on-site.