Boy, 15, Killed in Hit and Run While Riding Bike 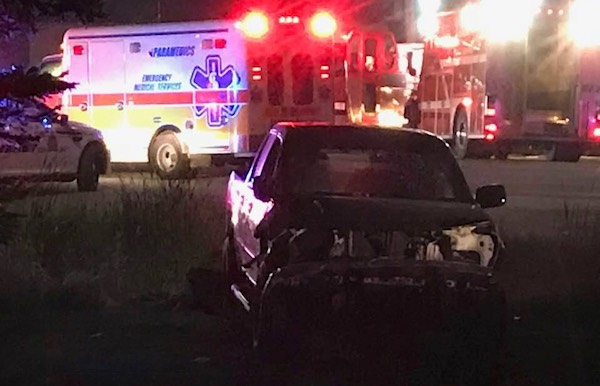 A truck sits in a ditch off of Highway 9 and Donald Road after being two cyclists were hit Friday night. (BRENT POLSON / FACEBOOK)

UPDATE: Sunday, August 12 — Justin Joseph Little, 29, has been charged with 14 offences, including six counts of failing to comply with a recognizance order. He remains in custody.

A 15-year-old RM of St. Andrews boy has died and another 15-year-old boy is in hospital after both were hit by a truck while riding their bikes on Friday night.

The crash happened at around 11:45 p.m. on Donald Road just off of Highway 9.

RCMP say the pair was riding on the shoulder when a vehicle veered off the roadway and hit them. They were thrown into the ditch by the impact.

The 29-year-old Calgary man driving the truck fled the scene after the vehicle became disabled. He was eventually tracked down by a police dog in a vehicle on Donald Road.

Police say the truck was later discovered to have been stolen from Winnipeg.

The second boy is listed in stable condition with non-life threatening injuries.

The driver faces multiple charges, including impaired driving. He remains in custody.