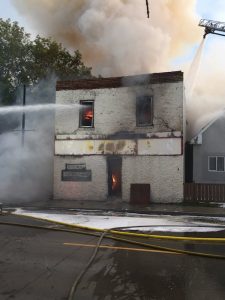 Firefighters work to extinguish a blaze at 702 Selkirk Avenue on Tuesday, August 14, 2018. (CITY OF WINNIPEG)

Winnipeg firefighters deployed a drone for the first time Tuesday night while fighting a fire at 702 Selkirk Avenue.

Residents of the building self-evacuated by the time crews arrived at around 7:45 p.m. No injuries were reported, but the city says two cats remain missing.

The drone was launched to detect hot spots and give crews on the ground a better visual of what they were dealing with in other parts of the building.

“With the drone’s help, the commander of the scene was better able to critically assess the dangers of this fire and direct the crews to target the fire in a more efficient manner,” said Assistant WFPS Chief Jay Shaw.

“This is a great example of how our department is using technology to increase safety for our crews and also create better outcomes for citizens.”

The drone program — part of a $44,037 investment from the city’s Innovation Capital Fund — was launched in July of this year. Four trained pilots work on each shift.

The building was a complete loss and the remaining structure will be torn down today. Fire crews remain on scene and the cause of the blaze is under investigation. No damage estimate is available.