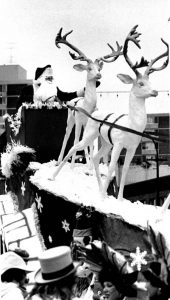 Two Winnipeg shopping centres have stepped up to make a dent in the fundraising efforts of the Winnipeg Santa Claus Parade to replace a float that doubled as a platform for Santa’s sleigh.

Kildonan Place and Grant Park Shopping Centre have donated a combined $6,250 to the GoFundMe campaign towards a $100,000 goal — meaning Santa will have a new ride this year.

“When we heard about the need to build a new float for Santa, we jumped at the opportunity,” said Corey Quintaine, marketing manager for both malls.

“Grant Park and KP have been a part of Winnipeggers’ happy holiday memories for decades, and we are excited to be a part of the Santa Claus Parade’s community legacy.”

With the donation, KP’s name will be etched into Santa’s sleigh for decades to come, and Grant Park’s name will be on one of his trusty reindeer. The malls have been a part of the parade’s pre-event street parties for the last two years.

Parade director Monica Derksen says she hopes other businesses come to the table and help support the 109-year-old Christmas tradition.