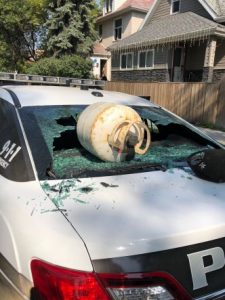 A Winnipeg man is in custody after police say he threw a propane tank through the window of their cruiser on Wednesday. (WPS / HANDOUT)

WINNIPEG — A man believed to be high on methamphetamine threw a barbeque propane tank through a window of a police cruiser on Wednesday.

Officers were in the 300 block of Redwood Avenue on an unrelated matter at around 11:15 a.m. An officer was seated in the front passenger seat when a man approached from behind and threw the full-sized tank into the rear window of the cruiser.

The officer wasn’t injured and police say the man didn’t communicate with any officer before throwing the tank.

Richard Lee Friesen of Winnipeg, 30, has been charged with assaulting a peace officer and mischief under $5,000.