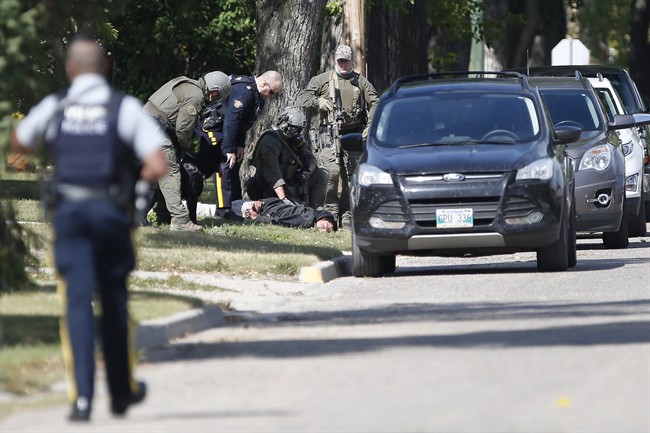 The RCMP emergency response unit arrests an alleged suspect in Neepawa, Man., on Thursday, August 30, 2018, following the shooting of a RCMP officer in Onanole, Man. (THE CANADIAN PRESS/John Woods)

WINNIPEG – Four suspects are in custody after an RCMP officer was shot and seriously injured while responding to a break-and-enter call near a small resort town in western Manitoba.

Assistant Commissioner Scott Kolody, the force’s commanding officer in Manitoba, said two Mounties got out of their car at a rural property near Onanole on Wednesday night when they were immediately fired upon.

RCMP said officers did not shoot back.

“One officer was struck and airlifted to a Winnipeg hospital,” Kolody said Thursday. “Earlier this morning, our officers arrested three adult male suspects … We continue to look for an additional suspect who is considered armed and dangerous.”

Six hours later, the fourth suspect was taken into custody following a standoff at a home in Neepawa, about 75 kilometres by road southeast of Onanole.

“At this point in the investigation, we believe all suspects involved in … (the) shooting are in custody. There is no further threat to public safety at this time,” RCMP said in a release.

The 42-year-old injured corporal was in serious but stable condition in hospital, Kolody said. He did not divulge details of the injuries.

“They are deeply shaken by this incident,” he said. “The RCMP is truly a large family and what has unfolded over the last few hours truly affects every officer and employee from coast to coast.”

Lloyd Ewashko, reeve of the Rural Municipality of Harrison Park —which includes Onanole — said dozens of officers were in the area after the shooting.

“It was quite intense,” Ewashko said in an interview with The Canadian Press.

“I would imagine in and around 35, 40. Some were out in the field manning roadblocks; some were here in our office.”

Dean Gunnarson, an escape artist who lives in Onanole, was on his way to Winnipeg for an early-morning flight to the United States. He saw many police cars rushing down the road and encountered an officer at a roadblock.

“We’d had a series of break and enters (in the area) over the last year or so … so I asked him, ‘Are you looking for some guys doing break and enters?’ He said, ‘No, we had something serious. Somebody got shot,'” Gunnarson said.

Craig Atkinson, a municipal councillor, said he understood the three initial arrests were made along or near a provincial highway.

“I believe (the suspects) were seen or reported to be breaking into people’s houses.”

Onanole is about 100 kilometres north of Brandon and sits near the entrance to Riding Mountain National Park. It has about 350 year-round residents and others who own cottages.

“We’re not used to that type of activity in our community and it’s frightening for sure,” Ewashko said.

— With files from Ken Trimble in Edmonton