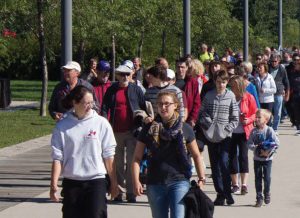 The 2018 Multiple Myeloma March will take place at the Norwood Community Centre on September 16. (MYELOMACANADA.CA)

Kim Krahn is an avid baseball fan who loves her work as an intensive care unit nurse. In 2017, after suffering pain in her hips and ribs for months, she asked her doctor to do some tests. Before she could get the results, she was overcome with so much pain that she checked herself into the emergency room.

She learned that lesions in her hip and rib bones had caused so much damage that her hip was close to breaking. The cause: multiple myeloma, an incurable cancer of the plasma cells. Kim was just 49 years old.

“The news was shocking. Not to mention, life-changing,” says Kim. “I have been a nurse for 30 years and have friends who are nurses. Many of us had never heard of multiple myeloma until I was diagnosed.”

This realization has prompted Kim to raise awareness about this little-known disease by taking part in this year’s Multiple Myeloma March. The March will be held on Sunday, September 16, at 8:30 A.M., at the Norwood Community Centre.

Kim hopes this year’s Multiple Myeloma March will contribute to further improving patient outcomes. “One of the main reasons I’m marching is to raise funds to help other people living with myeloma who may need access to innovative treatments in the future,” she says.

The Multiple Myeloma March increases awareness and raises funds for clinical research and supports advocacy for accelerated access to new therapies for Canadians living with myeloma.The five-kilometre walk/run has helped support Canadian clinical trial research that has the potential to be practice-changing and shape the Canadian treatment landscape. Over the last decade, the average life expectancy of a myeloma patient has doubled, with many now living 10 years or longer thanks to unprecedented advances in research and the development of new treatment options.

Winnipeg is one of 23 communities across the country that will be participating in the march. Myeloma Canada hopes to raise $45,000 from the local event.

For more information about the Multiple Myeloma March, visit myelomamarch.ca.