Home » The Canadian Press » ‘This is Historic:’ Deal Reached on Broken Rail Line to Churchill in Manitoba

‘This is Historic:’ Deal Reached on Broken Rail Line to Churchill in Manitoba 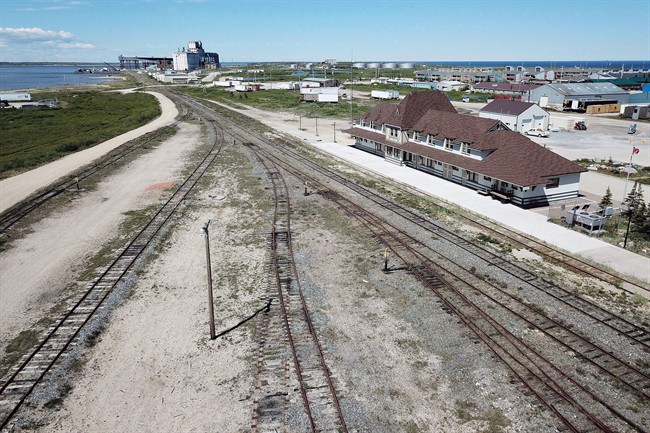 An aerial view of the rail line and Via Rail station is shown in Churchill, Manitoba, Wednesday, July 4, 2018. A deal has been reached to sell and repair a broken rail line that is the only land link for the northern Manitoba town of Churchill. (THE CANADIAN PRESS/John Woods)

CHURCHILL, Man. – A deal has been reached to sell and repair a broken rail line that is the only land link for the northern Manitoba town of Churchill.

The community on Hudson Bay has been isolated since spring flooding in 2017 damaged the line and forced fuel and food to be flown in at skyrocketing costs.

The town said the deal includes the sale of the Hudson Bay Railway, the Port of Churchill and the Churchill Marine Tank Farm.

“This is great news,” Churchill Mayor Mike Spence said in an interview. “This is historic.”

A news release from the federal government late Friday said the assets have been purchased by the Arctic Gateway Group, a private-public partnership of Missinippi Rail Limited Partnership, Toronto-based Fairfax Financial Holdings and AGT Limited Partnership.

It said they are fully committed to the restoration of the Hudson Bay rail line.

“I want Canadians living in northern Manitoba and Nunavut to know that the government of Canada understands the importance of the line to their daily lives,” said Jim Carr, the minister of international trade diversification.

Dominic LeBlanc, the minister of intergovernmental and northern affairs and trade, added that it’s an important rail line for the people of Churchill and the surrounding communities who depend on it for their food supply and export of their grain.

It’s not clear how quickly repairs to the line can be done, but officials said in the news release that construction crews are mobilizing.

“Phase one of the project will be to repair the rail line, undertake safety and rehabilitation upgrades to the port and the railway assets,” said Paul Rivett, director of Arctic Gateway Group. “We will commence the repairs and do all we can to restore service expeditiously and safely.

“We are racing against time.”

Hudson Bay Railway has said the line has been losing money for years and the necessary repairs would cost tens of millions of dollars.

Manitoba Premier Brian Pallister said the deal is positive for all Manitobans, particularly those who live in Churchill and northern Manitoba.

“We are hopeful the repair of the rail line can occur as soon as possible so that service can be resumed before freeze-up,” he said in a statement.

Pallister said, however, that they have made the financial commitments and logistical arrangements to ensure propane resupply for the winter.

Spence said he’s hoping the work can start next week and be completed this fall.

“We’ll let the contractors get it done and we’ll monitor it, naturally,” said the mayor. “We’re hoping this can get done in record time.”

Spence added that the deal is the light at the end of the tunnel.

“This community has been so solid, so strong and it’s been challenging, it’s been so difficult,” he said. “This afternoon, this evening, some of the folks I’ve just talked to are so happy, so pleased, and very excited about a bright future.”