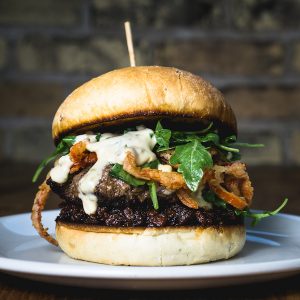 Winnipeg restaurants are cooking up something special that you won’t normally find on their menus.

It’s all for Le Burger Week, happening September 1-7, where eateries compete to whip up the best burgers in the city.

The national festival now has more than 200,000 participants, including 114 in Winnipeg.

“Every year, we aim to bring the festival to a new level, which is why we are very proud to be undertaking the largest city edition of LeBurger Week — in Winnipeg!” said local ambassador Daniel Gurevich from the Charcoal Collaborative.

To throw their hat in the ring, each participating establishment must develop a unique burger reflective of their overall concept, style, and cuisine. These competition burgers are then offered at a special “burger price.”

Some local restaurants taking part include Big Smoke Burger, Vicky’s Diner, The Handsome Daughter, and the University of Manitoba’s The Hub Social Club, among others.