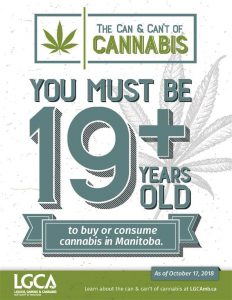 One of several ads appearing as part of a public awareness campaign surrounding legal cannabis. (LGCA)

WINNIPEG — A new public awareness campaign has launched in Manitoba surrounding the legalization of marijuana.

The newly-anointed Liquor, Gaming & Cannabis Authority of Manitoba revealed the Can & Can’t of Cannabis campaign on Tuesday.

“The legalization of cannabis is a significant challenge for the Manitoba government,” said Justice Minister Cliff Cullen.

“In addition to keeping cannabis out of the hands of our kids and away from the black market, it is our job to make sure Manitobans are prepared with the information they need to make responsible choices.”

“Campaigns like this will help us get factual information to Manitobans aged 19 and older who may choose to use this product legally,” she said.

Messages throughout the province will provide information such as “You can’t smoke or vape cannabis in public” and “You must be 19+ years old to buy or consume cannabis in Manitoba.”

Once cannabis becomes legal on October 17, the LGCA will regulate retail cannabis stores in Manitoba to ensure that cannabis is purchased, distributed and sold in a manner that is in the public interest.