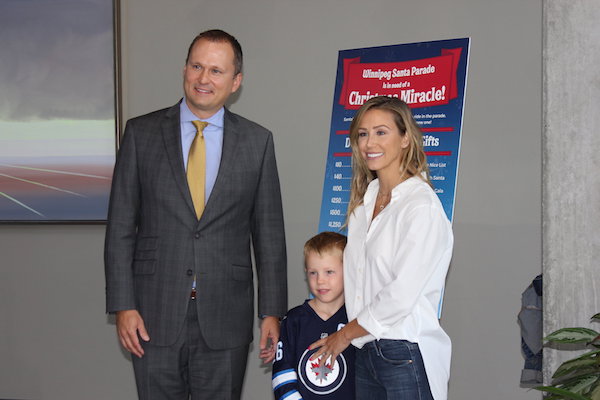 This year’s Winnipeg Santa Claus Parade will have multiple special guests to grand marshal the big man in red.

Sam Wheeler, wife of Jets’ winger Blake Wheeler, will join their son, Louie, on Saturday, November 17 through the downtown streets of Winnipeg.

The Wheelers will be accompanied by fellow wives, girlfriends and families of Jets’ players.

“It is an honour to be selected to be a part of such a long-standing tradition in this community,” Sam said during an announcement Thursday at Manitoba Hydro Place.

“None of our families are from Winnipeg so having events like this to be a part of makes us feel like we’re at home. After all the support this community has shown the Jets over the last seven years, we are always thrilled to be able to show our support back.”

The grand marshal acts as the ceremonial leader of the parade and embodies outstanding contributions to the Winnipeg community, parade officials say.

The Winnipeg Santa Claus Parade is celebrating its 109th year in 2018.