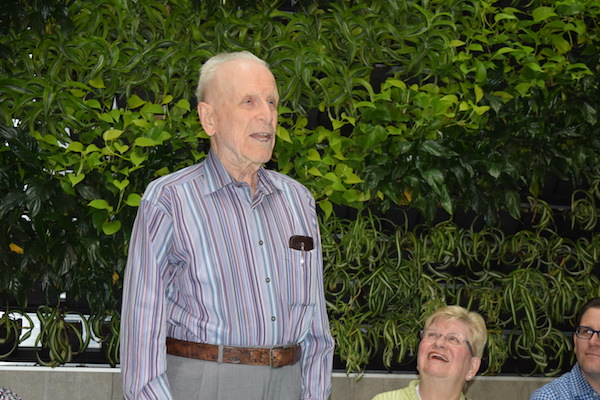 Bill Atkinson has been a member of the YMCA-YWCA of Winnipeg since 1938. (HANDOUT)

WINNIPEG — Bill Atkinson has been coming to the YMCA-YWCA of Winnipeg for 80 years and still swims there six days a week.

The 101-year-old veteran was celebrated on Tuesday at the downtown branch, having first joined the club in 1938.

“Bill is an inspiration to Y members of all ages and our staff,” said Kent Paterson, president and CEO of the YMCA-YWCA of Winnipeg.

“Bill is an avid health enthusiast who not only swims six days a week at the Y, but also makes the one-mile round trip walk from his home each day.”

Excluding two years when he served in WWII, Atkinson has had continued membership at the club.

Atkinson was joined by two of his daughters and members of their families to be presented with a monogrammed towel to mark his 80-year membership.

Paterson added it’s because of members like Atkinson, that the club is able to make its programs and services accessible to people from all walks of life.