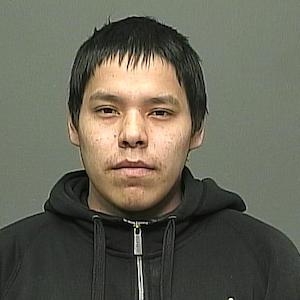 Alex Arumeul Genaille is wanted on several charges after Winnipeg police say he stabbed a dog on August 31. (WPS / HANDOUT)

UPDATE: September 12 — Genaille was arrested Wednesday in the 400 block of Boyd Avenue after a short foot pursuit. He remains in custody.

Winnipeg police are looking for a man they say stabbed a dog in the face on August 31 in the Lord Selkirk Park area.

A group of people were walking and biking down a back lane on Stella Avenue at around 9:15 p.m. when the incident occurred. Police say as they passed a dog in a yard, the man stopped and put on a mask before injuring the Bullmastiff. The knife caused a serious facial injury to the animal.

An arrest warrant has been issued for 20-year-old Alex Arumeul Genaille of Winnipeg. He is described as Indigenous in appearance, 5’6″ tall, weighing approximately 172 lbs. and has a medium build. He has brown hair and brown eyes.

Genaille faces charges of possession of a weapon, causing unnecessary suffering to an animal and disguise with intent.