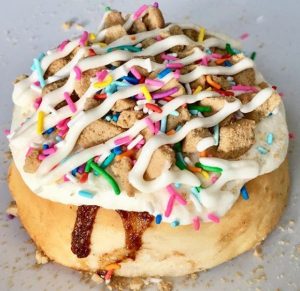 The gourmet cinnamon rolls foodies were salivating over on “Shark Tank” have finally made their way to Winnipeg.

The first city location of Cinnaholic opens its doors on Friday, offering vegan cinnamon rolls with dozens of indulgent toppings.

The California-based franchise opened its flagship location in Berkeley in 2009. Five years later, the company landed a $200,000 investment from entrepreneur Robert Herjavec on the popular television show.

The brand expanded north of the border earlier this year, opening the first Canadian location in Edmonton in May.

The restaurant offers 30 frosting flavours — such as cream cheese, caramel, and cake batter, and more than 20 toppings, including brownie bites, cookie dough, and marshmallows.

Local franchisees Colin and Menchie Finlay are responsible for bringing Cinnaholic to Winnipeg, with plans to open at least two more in the city.

To celebrate the opening, Cinnaholic will be selling $1 cinnamon rolls from 10 a.m. to 2 p.m. on Friday, September 14. The bakery is located at 170-1600 Kenaston Boulevard.