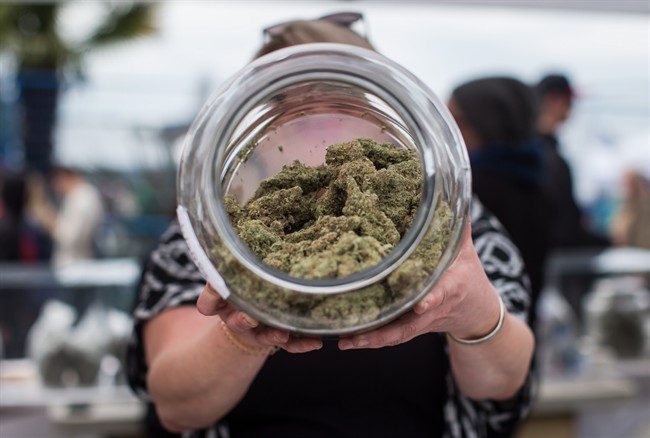 A vendor displays marijuana for sale during the 4-20 annual marijuana celebration, in Vancouver, B.C., on Friday, April 20, 2018. Store owners who will sell cannabis in Manitoba are facing strict rules about how they display and secure the drug when its recreational use becomes legal next month. (THE CANADIAN PRESS/Darryl Dyck)

WINNIPEG – Store owners who will sell cannabis in Manitoba will face strict rules about how they display and secure the drug when its recreational use becomes legal next month.

New rules set by the province will require that stores have monitored alarm systems and video cameras that operate continuously.

The cannabis will have to be kept in locked cases, except for small display containers that can be examined by customers but still secured with a chain or some other means.

Other rules include a 30-gram limit on individual sales and requirements to verify the age of customers to ensure they are 19 or older.

Earlier this week, the government released a list of fines that will be applied to people who break the cannabis laws, including a $2,542 fine for people who grow recreational pot at home.

“Our government has consistently emphasized our commitment to keep cannabis out of the hands of our youth and away from the black market,” Cullen said in a written statement Thursday.