Home » News » Pathway Development at The Forks Honouring Indigenous Past

Pathway Development at The Forks Honouring Indigenous Past 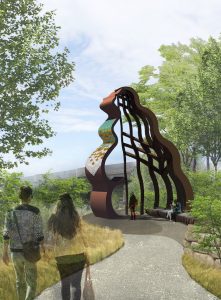 An artist’s rendering of the sculpture that will be part of the Niizhoziibean pathway at The Forks. (HANDOUT)

WINNIPEG — A popular pathway at The Forks has been named to honour the city’s Indigenous heritage.

The South Point pathway is now known as Niizhoziibean, meaning two rivers in Ojibway, and is located near where the Red and Assiniboine rivers meet.

“Niizhoziibean not only embodies the spirit of the traditional past of The Forks but enhances our understanding of what this place means – a collaborative space where people have been coming together to trade, grow, and make life for millennia,” said Niigaan Sinclair, associate professor Dept. of Native Studies at the University of Manitoba.

The name was uncovered by elders Clarence and Barbara Nepinak during a ceremony on Friday.

The Forks, Ottawa and The Winnipeg Foundation is undertaking $1.2 million in improvements to the pathway that will include a 30-foot sculptural piece to be installed at the pedestrian entrance to the site from Queen Elizabeth Way.

Artists K.C. Adams, Jamie Isaac, and Val Vint were chosen through a call for submissions to create pieces on the site.

The federal government and The Winnipeg Foundation are each contributing $500,000, while The Forks Renewal Corporation is donating $200,000.

Future fundraising efforts will allow for an outdoor bush gallery and boardwalk within the forest canopy.

← Previous: Winnipeg Marketing Company on the Fast Track to Growth Next: Police Look for Witnesses After Woman Struck by Vehicles in St. Vital →
Tags: The Forks | Winnipeg