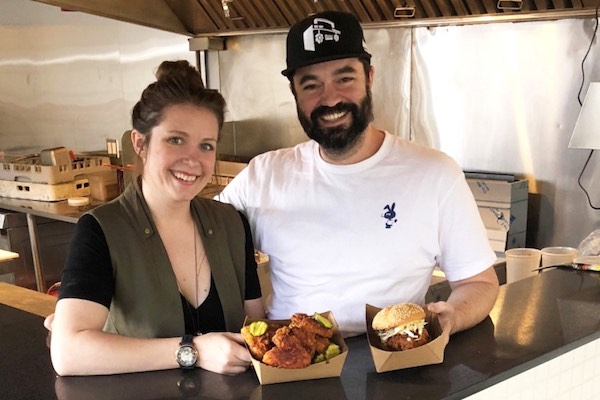 Lindsay and Doug Stephen Jr., owners of DownLow Chicken Shack in Vancouver. A pop-up restaurant will bring the brand to Winnipeg September 22-23. (HANDOUT)

A southern-style chicken restaurant will open up at The Forks next week for two days only.

“The DownLow Chicken Shack has been a wild ride for us,” said Doug Stephen Jr., son of Muddy Waters’ owner Doug Stephen Sr.

“Every day, we have line-ups out the door and sell out of chicken before closing time. Muddy Waters is the perfect spot for us to introduce Winnipeggers to Nashville hot chicken.”

The pop-up’s menu will include the signature Nashville hot chicken ranging in five heat levels, from mild to “A Side of Milk,” as well as chicken-on-a-bun, full-sized wings, and southern-style side dishes.

The pop-up is slated for Saturday, September 22 and Sunday, September 23, from 11 a.m. to 4 p.m. or until the chicken is sold out. No reservations will be available.

Muddy Waters previously announced it will close its doors on September 30 as The Forks moves in a different direction for the longtime space.