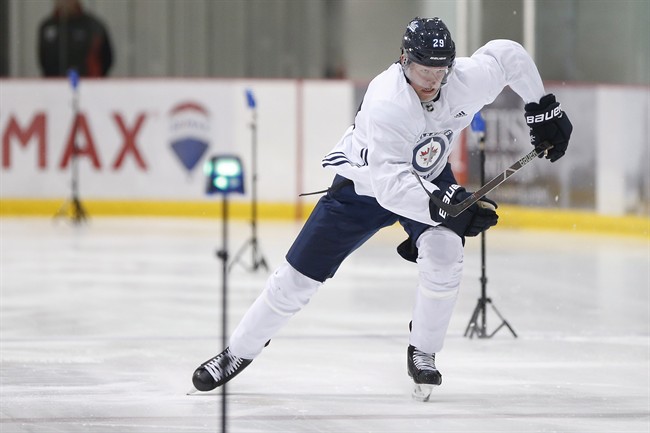 The two don’t go hand in hand very well, so the Winnipeg Jets’ 44-goal scorer from last season made some changes over the summer to become leaner and faster.

He cut down on candy and junk food, his admitted “bad habit,” and skated more. Laine shed about 14 pounds and is at 215 pounds to start his third NHL season.

It didn’t help too much, however, with a “tough” skating drill between the lines that ended his group’s on-ice testing Friday.

“I was gassed, that’s pretty much it,” the Finnish sniper told reporters.

But he does think he’s in better shape.

“I did better than last year, so I’m satisfied,” he said. “But there’s a lot of room to improve and you can always do more levels.”

If he needs some guidance, he can always tap into the knowledge of the team’s fitness guru, centre Mark Scheifele, who takes a scientific approach to his training and health.

“He’s a smart dude,” Laine said of Scheifele in a one-on-one interview with The Canadian Press. “I’ve picked up some things he does, obviously with nutrition on and off the ice, but I haven’t actually asked him about that.”

The 20-year-old Laine now tries to eat healthy and makes sure he knows what he’s eating.

Schiefele said teammates ask him for advice once in a while, but he doesn’t push his knowledge on them.

“I’m not going to go chasing guys, but guys here and there will ask me about certain things, certain nutrition things or certain training things that I do,” he said.

“I’m an open book with them. Whenever a teammate or someone in the organization has a question, I’m always open to helping them.”

He added that scientific information is more available to athletes these days and it does make a difference.

“Nutrition is such a big part of our game and a big part of an athlete’s life so it’s only going to be more and more prevalent from here on,” Schiefele said.

While Scheifele has hired his own chef in the past, Laine is once again relying on his roommate for meals at home.

His mother is back living with him in Winnipeg for a third straight season.

“I think when you just eat normally, normal, good home food, you’ll be fine,” Laine said. “She’s cooking so I don’t have to worry about that.”

He also hasn’t totally cut out the candy.

“Sometimes you can eat a little, but that just gets into your head if you always think that you can’t eat anything. That’s just going to be nerve-wracking,” he said.

“I just try to eat not as much junk food and I think that was helping.”

But he predicted his approach to nutrition might change as he gets older.

“I think that over time and over the years I’ll always learn more and start being a better pro on and off the ice and start maybe taking more time to think about those things and making sure I’m a good pro and player.”

When Jets captain Blake Wheeler signed a five-year contract extension earlier this month, he said he trained with Scheifele during the summer and picked up some tips.

Head coach Paul Maurice said Scheifele and Wheeler’s awareness about things such as massage, nutrition and mental health, and how it makes them better, rubs off on their teammates.

“New guy comes in and he just figures that’s the way, what it takes to be great,” Maurice said. “So when your great players are doing it, the younger players will start doing it as well.”

He likes the changes he sees in Laine.

“A little leaner, a little older, a little less beard,” Maurice said. “And we think he can continue to be a better player, whether he scores 30 or 60 (goals).”

Laine said he has no number in mind for the amount of goals he’d like to rack up. His 44 were second in the league behind the 49 scored by Alex Ovechkin of the Washington Capitals last season.

“My only focus is improving as a player, that’s something I want to accomplish this year,” he said. “If I do that I’ll be satisfied with that, but I don’t have any number goals for the season.”