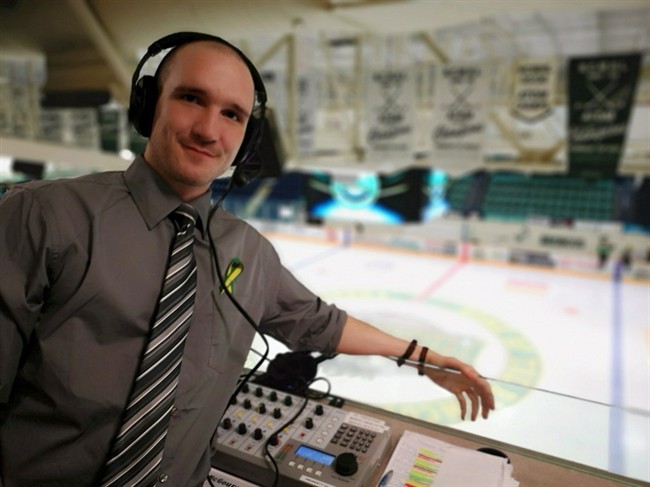 Rory McGouran is shown during the Humboldt Broncos’ home opener in Humboldt, Sask., on Wednesday, Sept.12, 2018 against the Nipawin Hawks. (THE CANADIAN PRESS/HO-Rory McGouran)

HUMBOLDT, Sask. – A plan to bring hockey broadcasters in from across the country to call Humboldt Broncos games this season will not go ahead.

Instead, local radio station CHBO Bolt FM has hired an up-and-coming Winnipeg broadcaster to take over for Tyler Bieber, its play-by-play voice who was killed along with 15 others in last April’s Broncos bus crash.

Rory McGouran, 27, said he knew after the crash that he wanted to be part of the radio station’s team.

“People ask me on how you fill Tyler’s shoes. You can’t. No one can,” McGouran said. “I’m not Tyler, no one can wear those shoes.”

Bieber, 29, was in his first year calling games for the Saskatchewan Junior Hockey League Broncos. He also coached high school football and basketball in the small Saskatchewan city.

After the crash, Saskatoon radio broadcaster and voice of the Western Hockey League Saskatoon Blades Les Lazaruk suggested online that other broadcasters step up and call games this season.

Soon he had around 300 people reach out to offer their services for the Broncos’ 58 games, including Sportsnet’s Rob Faulds and TSN’s Gord Miller and Chris Cuthbert. Cuthbert, who got his start in the SJHL calling Yorkton Terriers games, called the Broncos season opener on TV for TSN.

But Bolt FM program director Sarah Miller said the logistics of the pledge were too difficult.

“Everyone has their heart in the right place and that’s fantastic, but at the same time, we have to move forward,” Miller said. “We have to let that one person have the opportunity to grow and help the team grow.”

Miller said McGouran’s eagerness and skill level, along with his youthfulness, caught her attention.

McGouran said the best way to honour those who died in the crash is to do his best.

Miller said she isn’t looking at McGouran as a replacement for Bieber.

“Tyler will always be a part of the team,” she said. “This is his family. But that doesn’t mean there’s not room for somebody else.”