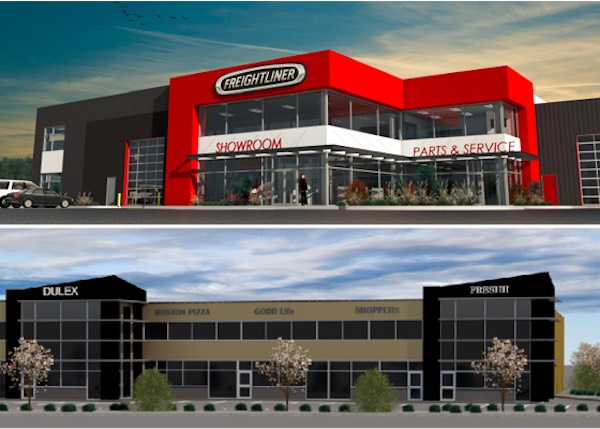 WINNIPEG — There’s a lot of movement happening at CentrePort Canada, with two companies planning large-scale expansions of their operations at the inland port.

Freightliner Manitoba will double the square footage of its space when it moves from Logan Avenue to a new 78,000-square-foot building on 13.5 acres in CentrePort’s Brookside Industrial Park Phase III.

Canada West Limited, an Edmonton-based real estate investment group, plans to invest $60 million to build up to eight build-to-suit and build-to-lease buildings on five lots totalling 26 acres within the Park.

“We are thrilled that Freightliner, who has been at CentrePort since the beginning, and Edmonton-based Canada West have both found a home for their new facilities at CentrePort,” said Diane Gray, president and CEO, CentrePort.

“Both companies have strong visions for their futures. They’re investing in the continued success of their individual businesses, but they will also contribute to the overall growth of Manitoba’s economy. That’s ultimately what CentrePort is all about.”

Freightliner’s new facility is scheduled to open in early 2020 and will include 35 service bays, an indoor showroom, warehousing space and an enhanced new service and parts department.

Canada West says its new buildings will account for more than 350,000 square feet, featuring high-end finishes, landscaped exteriors, and a mix of space for distribution, offices and customer-facing retail/showroom areas.

The company’s first 50,000-square-foot building is expected to open in June 2019. Construction will begin in the coming weeks.

The Park is located in CentrePort North in the RM of Rosser and has frontage onto Red Fife Road, which connects to CentrePort Canada Way.